The MEA, in a statement, said it awaits a comprehensive report on the meeting from the Charge d’ Affaires based on which it will decide the further course of action. 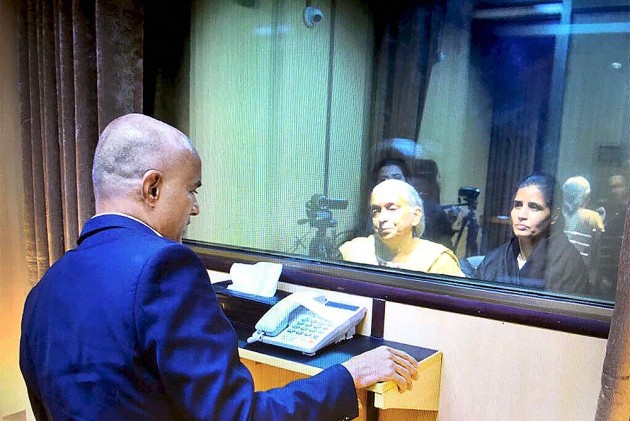 The Ministry of External Affairs (MEA) on Monday said Kulbhushan Jadhav, the former Navy official currently on death row in Pakistan, appeared to be under extreme pressure to "parrot false narrative to bolster Pakistan's untenable claims", during his meeting with a senior Indian diplomat.

The meeting between the diplomat and Jadhav took place after Pakistan formally granted the consular access to him in line with the decision of the International Court of Justice.

The MEA said that it awaits a comprehensive report on the meeting from the Charge d’ Affaires based on which it will decide the further course of action.

External Affairs Ministry Spokesperson Raveesh Kumar said Monday's consular access is a part of the "binding obligations" of Pakistan as ordered by the ICJ to ensure effective review and reconsideration of the conviction and sentence awarded to Jadhav through a "farcical process".

He said External Affairs Minister S Jaishankar has spoken to Jadhav's mother and briefed her about the latest developments.

Jadhav, 49, was sentenced to death by a Pakistani military court on charges of "espionage and terrorism" in April 2017. Following the verdict, India had moved the International Court of Justice (ICJ), seeking a stay on his death sentence and further remedies.

Earlier, Pakistan had offered consular access on August 1, but with conditions - that one Pakistani official would be present alongside.

On August 2, India had asked Pakistan to provide "unimpeded consular access" to Jadhav, in an environment "free from the fear of intimidation and reprisal", after Islamabad said it has sent a proposal to New Delhi allowing consular access to the Indian national.

Last July, the ICJ ruled that Pakistan review the death sentence awarded to the Indian national.

Following the ICJ order, India has asked Pakistan to grant full consular access to Jadhav at the earliest in "full compliance and conformity" of the world court's verdict.

The ICJ upheld India's stand that Pakistan had "breached" the Vienna Convention on diplomatic relations, which gives countries the right to consular access when their nationals are arrested abroad.

Pakistan claims that its security forces arrested Jadhav from the restive Balochistan province on March 3, 2016, after he reportedly entered from Iran.