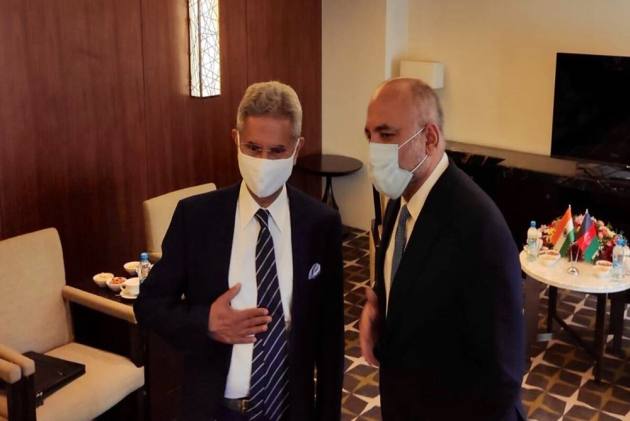 In the wake of the deteriorating security situation in Afghanistan and India, External Affairs Minister S Jaishankar met his Afghan counterpart Mohammad Haneef Atmar in Dushanbe to discuss the crisis in the war-torn country. This comes days after around 50 diplomats and security personnel evacuated the consulate in Kandahar.

He also met his Uzbek counterpart Abdulaziz Kamilov in Dushanbe and discussed the situation in war-torn Afghanistan.

Earlier in the day, Jaishankar arrived in the Tajik capital on a two-day visit to attend the meetings of the Shanghai Cooperation Organization Council of Foreign Ministers and the SCO Contact Group on Afghanistan.

"Began my Dushanbe visit by meeting with Afghan FM @MHaneefAtmar. Appreciate his update on recent developments. Looking forward to the meeting of the SCO Contact Group on Afghanistan tomorrow," Jaishankar tweeted.

Began my Dushanbe visit by meeting with Afghan FM @MHaneefAtmar. Appreciate his update on recent developments. Looking forward to the meeting of the SCO Contact Group on Afghanistan tomorrow. pic.twitter.com/O34PDkOFoh

While there was no official readout of Jaishankar-Atmar meeting from the Indian side, an official release from the Afghan side said they met to "discuss the political and security situation, peace process, and India's cooperation with Afghanistan in various fields, including the joint fight against terrorism and the establishment of lasting peace and stability in Afghanistan and the region".

Jaishankar arrived in the Tajik capital on Tuesday for a two-day visit to attend the meetings of the Shanghai Cooperation Organization (SCO) Council of Foreign Ministers and the SCO Contact Group on Afghanistan which will discuss the deteriorating security situation, arising out of speedy withdrawal of the US forces.

During the meeting, Atmar elaborated on the political and security situation in Afghanistan, the outcome of Afghan President Ashraf Ghani's recent visit to Washington DC, and the United States' continued support and cooperation with Afghanistan, the release said.

It further added that Atmar, while referring to the escalation of the Taliban attacks in collusion with foreign fighters and regional and international terrorist networks against civilians and the Afghan defense forces, said overcoming this common threat was of vital importance to regional security.

Atmar underscored the constructive role of India in strengthening regional consensus on the Afghan peace process and the preservation of the achievements of the last two decades, it said.

Jaishankar expressed concern over the escalation of violence and stressed the need to end the bloodshed in Afghanistan, the release said, and added that the Indian minister assured Atmar of India's continued cooperation in strengthening regional and global consensus to achieve a political settlement in Afghanistan.

The meeting between the two foreign ministers comes days after India evacuated around 50 diplomats and security personnel from its consulate in Kandahar in a military aircraft in the wake of intense fighting between Afghan forces and Taliban militants.

Noting that the government was closely monitoring the situation, Indian officials said the Indian consulates in Afghanistan's Kandahar and Mazar-i-Sharif remain operational.

Earlier in the day, Afghanistan's envoy to India Farid Mamundzay said the Indian consulate general in Kandahar has not been closed and continues to operate through local staff.

"The temporary measure to bring diplomats back to India is based on safety and  security grounds. India's long-term commitment towards a peaceful, sovereign and stable Afghanistan remains strong," he said.

Several countries, including China and France have asked their nationals to leave Afghanistan over security concerns.

A number of countries have also sent home non-essential personnel from their diplomatic missions in Kabul and warned their citizens against travelling to Afghanistan.

The SCO contact group meeting on Afghanistan especially assumes significance as it comes amidst growing global concerns over Taliban fighters rapidly seizing control of a large number of areas in Afghanistan.

Afghanistan has witnessed a series of terror attacks in the last few weeks as the US looked to complete the withdrawal of its forces from Afghanistan by August-end, ending a nearly two-decade of its military presence in the war-ravaged country.

A major stakeholder in the peace and stability of Afghanistan, India has already invested nearly USD 3 billion in aid and reconstruction activities in the country.

The SCO, seen as a counterweight to NATO, is an eight-member economic and security bloc and has emerged as one of the largest transregional international organisations.

India and Pakistan became its permanent members in 2017.