S. Jaishankar was to join ministers from the other G-7 guest nations for the first formal gathering of the summit over a working dinner on Tuesday evening and further meetings on Wednesday. 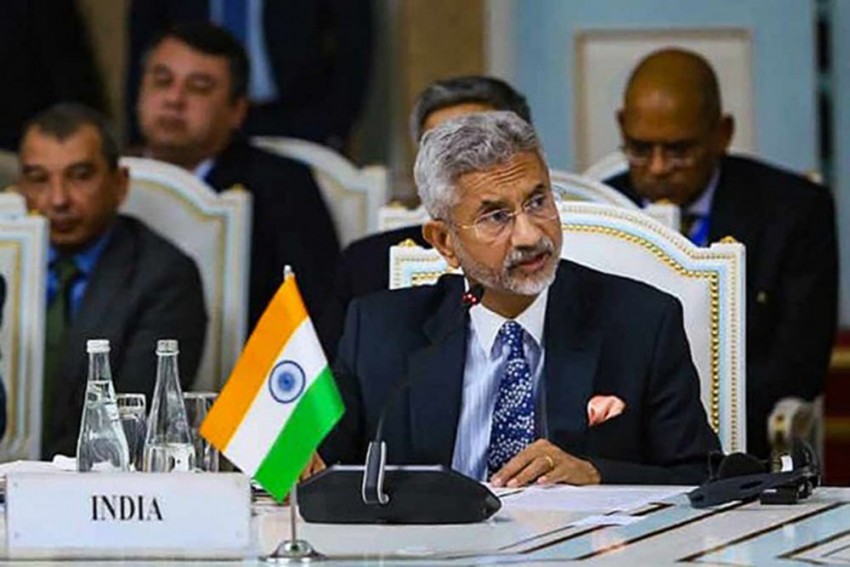 External Affairs Minister S Jaishankar was forced to conduct his meeting in UK virtually after members of his delegation to the UK tested positive for Covid-19.

"As a measure of abundant caution and also out of consideration for others, I decided to conduct my engagements in the virtual mode. That will be the case with the G7 Meeting today as well," he said.

"Was made aware yesterday evening of exposure to possible Covid positive cases," Jaishankar said on Twitter on Wednesday.

According to numerous sources, two members of the delegation tested positive on Tuesday with further test results still awaited.

Jaishankar was to join ministers from the other G-7 guest nations for the first formal gathering of the summit over a working dinner on Tuesday evening and further meetings on Wednesday.

“We deeply regret that Foreign Minister Dr Jaishankar will be unable to attend the meeting today in person and will now attend virtually, but this is exactly why we have put in place strict Covid protocols and daily testing,” a senior UK diplomat at the Foreign, Commonwealth and Development Office (FCDO) said.

A bilateral meeting scheduled with UK Foreign Secretary Dominic Raab at Chevening in Kent on Thursday is also expected to take on a virtual form.

Jaishankar had arrived in London on Monday for a four-day visit at the invitation of Raab to join the G7 Foreign and Development Ministers Meeting as one of the guest ministers.

“The addition of our friends from Australia, India, the Republic of Korea and South Africa, as well as the chair of ASEAN (Association of Southeast Asian Nations) reflects the growing significance of the Indo Pacific region for the G7,” said Raab.

The Indian delegation, yet to attend the G7 meeting at Lancaster House in London, is not seen as posing a risk to the summit itself.

At their other meetings held over the past few days, strict social distancing and mask-wearing were observed throughout and therefore Public Health England (PHE) have reportedly determined the risk to those in the meetings as low and not requiring self-isolation.

A diaspora-focussed event as part of the Global Dialogue Series, hosted by the Indian High Commissioner to the UK Gaitri Issar Kumar on Wednesday, took on a completely virtual shape instead of a planned hybrid formatEarlier on Tuesday, the External Affairs Minister met UK Home Secretary Priti Patel to sign a new Migration and Mobility Partnership Agreement.

“A fruitful meeting this morning with Home Secretary Priti Patel. Signed the Migration and Mobility Partnership Agreement that would facilitate legal travel and encourage talent flows,” he tweeted after the meeting.

This was followed by talks with Josep Borrell Fontelles, the High Representative of the European Union for Foreign Affairs and Security Policy, whom he thanked for the “support and goodwill” extended by the EU at a critical time in India’s COVID-19 pandemic.

He also participated in the first India-France-Australia Trilateral Ministerial Dialogue during which he said he had "substantive discussions" with French Foreign Minister Jean-Yves Le Drian and Australian Foreign Minister Marise Payne.

On his arrival in the UK on Monday, the minister held talks with US Secretary of State Antony Blinken, which focussed on detailed discussions on the global pandemic challenge, vaccine production capacity and reliable supply chains.

The G7 summit had been pitched as the first in-person summit since the pandemic and the first for the Group of Seven ministers – comprising Canada, France, Germany, Italy, Japan, US and UK as well as the European Union (EU) – to be hosted at a COVID-secure venue.

The protocols in place involve staff and delegates required to complete daily COVID-19 tests throughout the summit before entering any of the venues.

An on-site testing facility has been set up, which can test up to 50 delegates per hour. According to reports, more than 35 litres of hand sanitiser in G7-branded bottles were to be provided for the premises.

Besides, there is strict guidance on social distancing in place for the whole summit and delegates often separated by Perspex screens in meetings and during working lunches/dinners.

The scale of the delegations had also been reduced to minimise risk, with room headcounts indoors also cut down significantly.