Jamia Student Arrested In Connection With Violence During Anti-CAA Protest

'Asif is a key member of the Jamia Coordination Committee and played an active role in organising protest and riots in Jamia in December 2019,' the police said. 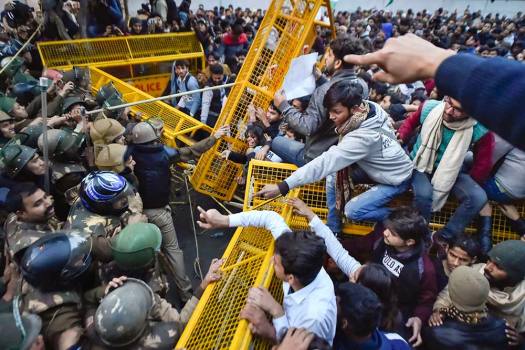 The Delhi Police's crime branch has arrested a student of Jamia Millia Islamia in connection with the violence in the Jamia area during a protest against the Citizenship Amendment Act in December last year, officials said on Sunday.

The police said Asif Iqbal Tanha, a resident of Abul Fazal Enclave in Shaheen Bagh, is a member of the Students Islamic Organization and was part of the Jamia Coordination Committee which spearheaded protests against the new citizenship law.

Asif, 24, is a third-year student of BA in Persian language.

On December 15 last year, protesters torched four public buses and two police vehicles as they clashed with police in New Friends' Colony near Jamia Millia Islamia during a demonstration against the amended Citizenship Act, leaving at least 40 people including students, policemen and fire fighters injured, officials had then said.

"Asif is a key member of the Jamia Coordination Committee and played an active role in organising protest and riots in Jamia in December 2019. He is a close associate of Umar Khalid, Sharjeel Imam, Meeran Haider and Safoora Zargar who had been key organisers of anti-CAA protests and subsequent riots," the police officer said.

The Jamia student was produced before a metropolitan magistrate who remanded him in judicial custody till May 31, the police officer said.