If the miscreant had been nabbed by the police on time, this deplorable incident could have been averted, the VC said. 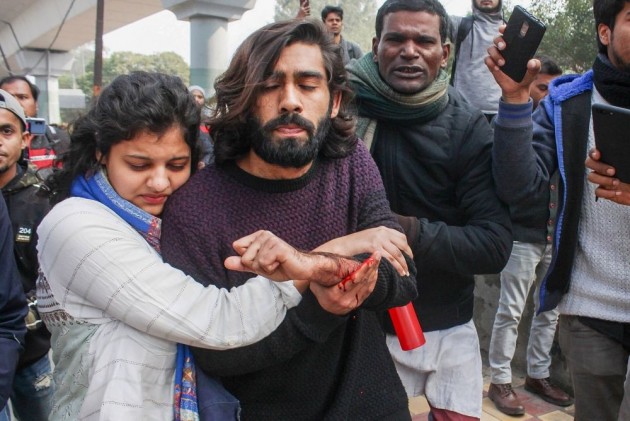 The Jamia Millia Islamia will pay for the treatment of the student who was injured in the Jamia Nagar firing incident on Thursday, vice-chancellor Najma Akhtar said.

Tension spiralled in the area on Thursday after a man fired a pistol at a group of anti-CAA protesters, injuring Shadab Farooq, before walking away while waving the firearm above his head and shouting "Yeh lo aazadi" amid heavy police presence.

The mass communication student is admitted at AIIMS and Akhtar visited him on Thursday night.

"All of sudden a miscreant emerged from nowhere brandishing his pistol amid his provoking slogans. Sadly enough, he opened indiscriminate fire on you, injuring Shadab Farooq.

"We condemn this murderous and brutal act. I also condemn the silence of the police who stood just at a stone's throw from the miscreant. It speaks volumes about them and has shook our faith in Delhi police,” Akhtar said.

If the miscreant had been nabbed by the police on time, this deplorable incident could have been averted, she said.

"The students acted very sensibly and resisted the natural urge of reaction and retaliation. The students’ wise act on the day of the martyrdom of Gandhiji is a great and reverent homage to him and to his stupendous moral courage,” Akhtar said.

The Alumni Association has also urged police to register FIR against the man who brandished a gun and opened fire in Jamia area.

In the fallout of the shooting incident, thousands of people and police personnel faced off against each other near the Jamia Millia Islamia University.

As night fell, massive protests broke out with agitated students and others gathering near the university, breaking barricades and clashing with police personnel while many sang the national anthem.

The protests ended around 9 pm after police released four detained demonstrators, according to university and police officials.