According to the officials, the investigators are yet to establish the flight path of the unmanned aerial vehicles. 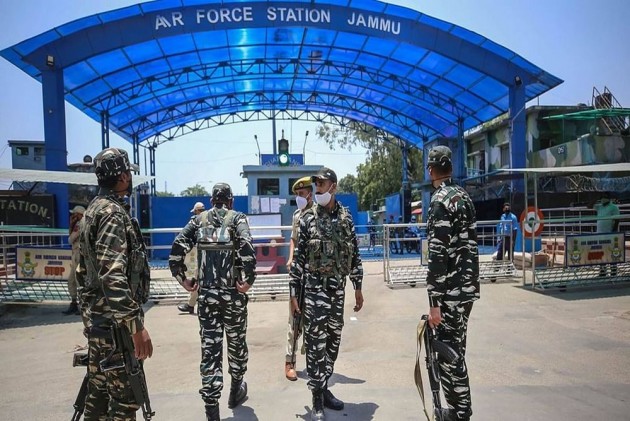 Days after two Indian Air Force personnel were left injured in two bomb blasts at the IAF base, a preliminary analysis of the payload carried by the two drones used in attacking the IAF station indicates that a cocktail of chemicals including RDX may have been used. The officials said the explosive material dropped by the drones might have been manufactured using a cocktail consisting of RDX but a final confirmation was still awaited.

According to the officials, the investigators are yet to establish the flight path of the unmanned aerial vehicles.

The IAF station located at Jammu airport continued to remain out of bounds for everyone with probe teams, which included one from the National Investigation Agency, picking up every bit of evidence available on the ground.

They said an NSG post-blast analysis team has been sent to the IAF station to study the material. This team will share its findings with the Jammu and Kashmir police and the NIA after completing the task.

In what is the first instance of Pakistan-based terrorists deploying drones to strike vital installations, two bombs were dropped at the IAF station in Jammu airport in the early hours of Sunday, causing minor injuries to two IAF personnel.

The explosions took place around 1.40 am within six minutes of each other. The first blast ripped off the roof of a single-storey building at the technical area of the airport manned by the IAF in Satwari area on the outskirts of the city. The second one was on the ground.

The investigations are going on but the teams are still clueless about the path taken by the drones before dropping the bombs, the sources said.

Various probe agencies and senior officers of the army, police and other security agencies visited the IAF station for the second day on Monday, while the Army’s Quick Reaction Teams were seen patrolling the areas outside the base on regular intervals.

J&K Director General of Police Dilbag Singh has termed the incident a "terror act" and said the police and other agencies were working with IAF officials to unravel the plan behind the attack.

Investigators scanned CCTV footage, including from cameras installed on the boundary walls of the airport, in an effort to determine from where the drones came. However, all the CCTV cameras focused on the roadside, the officials said.

Vehicular movement recorded around the venue at the time when the drones dropped the explosive material was being scrutinised minutely, they said.

Drones cannot be detected by radars deployed at border areas to monitor enemy activity, they said, suggesting that a different radar system that can detect drones as small as a bird be installed.

The drones dropped the explosive material and were either flown back across the border or to some other destination during the night, the officials said.

The aerial distance from the Jammu airport to the international border is 14 km.

Jammu airport is a civil airport with the runway and the ATC (air traffic control) under the IAF.

The Jammu and Kashmir Police has registered an FIR under the Unlawful Activities (Prevention) Act, officials said, indicating that the case is likely to be taken over by the NIA.

"The NIA is already supervising the investigation at the scene of the blast after joining the probe," one of the officials had said Sunday.

The FIR was also registered under relevant sections of the Explosive Substances Act and the Indian Penal Code at the Satwari police station on the application of a junior warrant officer of the IAF, he said.