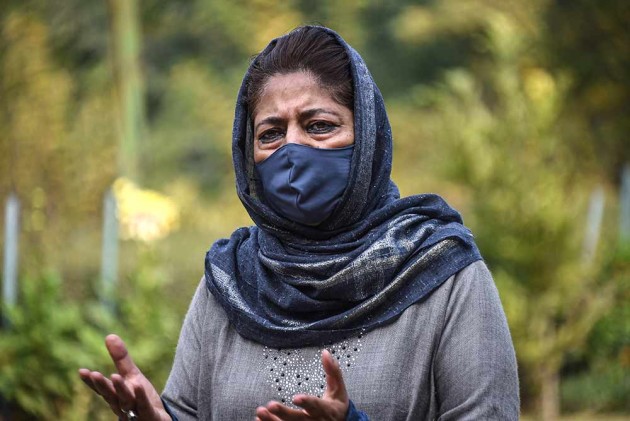 In a scathing attack on the Centre, former Chief Minister Mehbooba Mufti on Friday asked if the government is out to negotiate with China in spite of the latter “occupying 1,000 kilometres” in Ladakh, why is it not engaging with the people of Jammu and Kashmir?

Mehbooba was addressing her party workers in Jammu. Top leaders of People’s Alliance for Gupkar Alliance are in Jammu interacting with party workers and different political groups.

She said the government is afraid of the political leaders and political activities in Kashmir and it doesn’t allow political leaders to step out to meet people. “You tell the whole world that Kashmir is normal but you are afraid of political activities in the region. You don’t allow us to step out of our houses. You put the army, paramilitary and the police to stop us,” she said. “The government is so afraid that it won't allow even peaceful protest.”

The Peoples Democratic Party (PDP) leader said the state flag of the erstwhile state of Jammu and Kashmir had not come from China. She said that the Chinese PLA has taken over 1,000km in Ladakh region but the government continues to hold talks with them. She said despite the Chinese army constructing permanent barracks and buildings in the occupied territory, the government is not even taking the name of China.

Mentioning the eighth round of talks being held between India and China on Friday, she said, “You talk to China but you don’t talk to people of Jammu and Kashmir whose identity and culture and land you have destroyed.”

“The police called our youth who tried to take out protest and asked them to sign a bond that they wouldn’t protest any more. They were told it is anti-national to protest,” she said. “What kind of democracy and Ram Raj is it?” she asked.

She added that the government has done away with laws that would protect land and jobs of people of Jammu and Kashmir. While addressing her party workers, she said that people are rightly concerned about new laws as they have a potential to eradicate Dogra and Kashmiri identity.

In her speech, she said the accession of Jammu and Kashmir with India was based on certain conditions which have been flouted by the government. She said Prime Minister Narendra Modi didn’t name China during his speech in Bihar but counted abrogation of Article 370 as his contribution. “You don’t give people houses in Bihar but ask them to buy land in Jammu and Kashmir,” she added.

Mehbooba after her release in October this year from prolonged detention had released an audio message on Twitter, vowing to “take back” from New Delhi what was “unconstitutionally and undemocratically” snatched from Kashmir. She described August 5, 2019, the day Article 370 was revoked, a black day in the history of Jammu and Kashmir and called all decisions taken on that day as "black" decisions.