What has raised concern this time is the distance travelled by drone and that too without being detected. 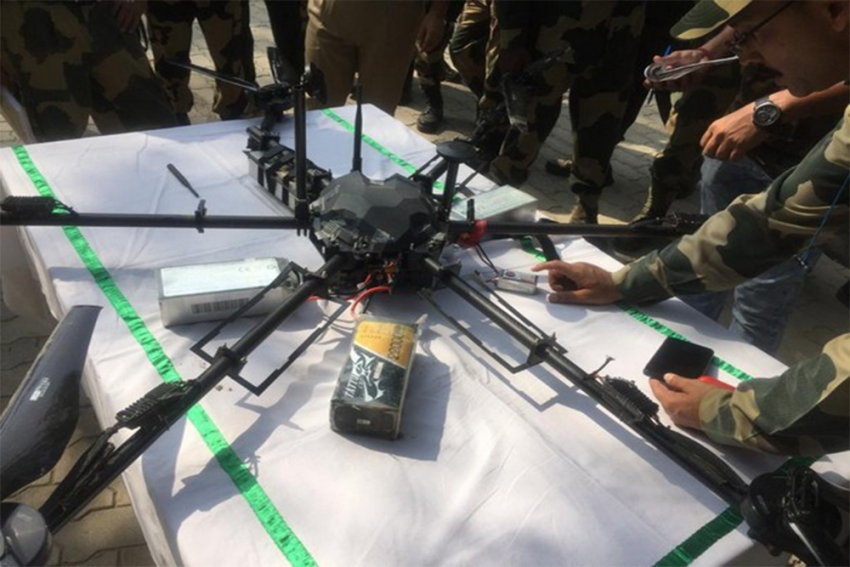 The possible first-of-its-kind usage of drone to carry out attack at Jammu IAF station comes in the backdrop of increased intensity of usage of drones to drop arms and weapons in Jammu from across the border.

Though the remnants of drones have not been recovered till now, security officials are now saying it was used to drop explosives.  The distance between Jammu air force station and international border with Pakistan is about 15-km.

There have been about 10 incidents of drones being used to drop arms and ammunition from across the border in Jammu in last one year.  Just about a month back, on May 14, 2021,   Border Security Force had said it recovered an AK-47 rifle, a pistol and some ammunition dropped by a Pakistani drone in  Samba district, about 40-km from the site of today’s attack.

The drone has been used to drop weapons and narcotics since 2019 along the international border firstly in Punjab area than in Jammu region.  In June 2020, IG BSF (Jammu Frontier) NS Jamwal said the threat of arms dropping by drones had increased in last one year.

However, what has raised concern this time is the distance travelled by drone and that too without being detected. Till now all the incidents of drone shot down or recovered have been along the border, both IB and LoC. In one or two incidents drones travelled about 10-km inside the Indian territory but in the area thinly populated.

In today’s incident the drone travelled about 15-km and that too in the highly populous area where BSF, police and army is deployed, without getting noticed.

A senior official, not wanting to be named, said usually high powered drone and much bigger in size can travel this much distance, and they are easy to detect especially if they had reached near airport.

“We still don’t know the size of the drone, if at all used, but it couldn’t have been a large one. So if smaller drone was used and managed to reach inside air force station, raises serious concern.”

Last June, BSF had shot down a Pakistani Hexacopter in Samba-Kathua area in Pansar area. It was fitted with four batteries, a radio signal receiver and two GPS devices, 8 x 6.2 ft in size, it weighed 18 kg.

It was carrying a payload of nearly 5 kg, including a US-made M4 semi-automatic carbine and had the name of one Ali Bhai, who BSF said was supposed to receive the arms consignment. It was probably the first time carbine used by US army dropped for terrorists in Kashmir was recovered in J&K.  Hexacopter can travel a distance of about 7-km.

Security officials say if smaller drone, if it was drone attack, was used then it would have been operated from the area in the vicinity of the technical airport, which is another area of concern.

Like in Samba-Kathua incident where probable name of consignment collector was pasted, terrorists had collected arms dropped by drone from a specific point.

Security officials say if it is an insider’s job then it points to tactical shift, of training operators to carry out drone attack.

On Sept 19, 2020 three terrorists affiliated to LeT terror outfits were arrested in joint operation of army and police near LoC in Rajouri district of Jammu region. Two AK 56 rifles, two pistols, grenade and Rs 1 lakh in cash were recovered from them. DGP Dilbagh Singh had then said the terrorists had collected consignment dropped by drone.

Sources said till now India doesn’t have proper mechanism to deal with drones entering Indian territory, though the threat has been increasing in the last three years. There is no mechanism in place to cut down frequency and disable GPS coordinates once drone enters India. Till now, drones have been shot down by the forces and that too on very few occasions.