Krishna Janmashtami 2021: All You Need To Know About This Annual Hindu Festival

The festival is celebrated with great zeal and enthusiasm, particularly in Mathura and Vrindavan. 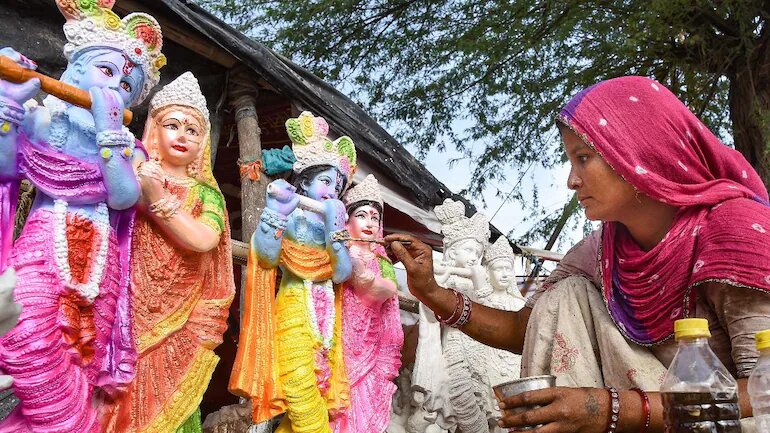 Janmashtami also popularly known as Gokulastami is the festival of the mighty Lord Krishna. This Hindu festival marks the birth of Lord Krishna, who is also considered as the eighth avatar of Lord Vishnu. According to the Hindu calendar, every year, this festival falls on the eighth day i.e., Ashtami of the Krishna Paksha, either in the month of August or September. This year, the celebrations of Janamastami will begin on 30th August.

The festival is celebrated with great zeal and enthusiasm, particularly in Mathura and Vrindavan. In order to welcome and pay respect to the venerable Lord Krishna, devotees sing religious songs, perform dance-drama enactments on the life of Lord Krishna, keep fasts (upavas), perform rites in temples and participate in Dahi Handi celebrations.

Lord Krishna was born in Mathura on the night of Ashtami in August – September. He is known to be the son of Vasudeva and Devaki. Devaki was also the sister of King Kansa, the evil ruler of Mathura. After Devaki’s marriage, a priest foretold that the couple’s eighth son would bring demise to Kansa. As the prophecy reached the ears of Kansa, he imprisoned Vasudev and Devaki.

The first six children of Devaki were instantly killed by Kansa. However, during the birth of their seventh child, Balram; it is said that the foetus was magically transferred to the womb of Princess Rohini. When the time of the birth of Lord Krishna approached, Vasudeva managed to escape the baby from the clutches of Kansa and gave him into the hands of Yashodha and Nanda Baba, living in Vrindavan.

Lord Krishna grew up in Vrindavan and turned out be an alluring, yet naughty child. His favourite delicacy was milk, curd and butter (white makkhan). It has been said that he would often steal butter breaking the pots of young girls (gopiyan). He is also considered as the ‘Makhan chor’.

Many women in Vrindavan used to tie their pots filled with butter at heights to prevent Krishna from breaking the pots and stealing the butter. Lord Krishna and his friends used to form human pyramids to reach to its height and steal the butter. This mischievous act is now widely celebrated during Janmashtami; known as the Dahi Handi celebration.

These celebrations take place on a huge scale with great style and richness. Every year, many devotees eagerly wait for this auspicious occasion in many parts of our country like Maharashtra, Gujarat, Eastern and Northeastern India, etc. The occasion is celebrated in an exceptional and remarkable manner in each of these states.

Janmashtami is celebrated in the cities of Mumbai, Pune, Latur and Nagpur. The celebrations spotlight the legendary Dahi Handi (earthen pot of yogurt) tradition, surrounded by cheerful crowds, social celebrities and media. Every year, a team of youths and boys move around the city, searching for hanging pots. The team also known as ‘Govindas’ form a human pyramid to break the pot. The specialty inside the pots is served as a community offering (prasad).

Now, in modern times, different corporations have started to sponsor this event and serve cash or gifts as an award to the Govinda teams. Several youth groups compete with one another for the cash prize. They go around the city exploring the hanging pots, seeking to break as many as possible. The celebrations are brightened by girls applauding, dancing and singing around the boys, as they form the pyramid.

The Janmashtami celebration centres in Dwarka, Gurjarat – the kingdom of Lord Krishna. The devotees visit famous temples like Dwarkadhish Temple. They perform folk dances and sing religious songs. The farmers decorate their bullock carts and conduct a parade to honour and worship Lord Krishna, the supreme god. The famous tradition of Dahi Handi celebration, called Makkhan handi in Gujarat is also commemorated.

The devotional poetry works of Dayaram – a well admired Guajarati poet, are also prevalent during Janmashtami festivities in Gujarat.

The well-known culture of celebrating Janmashtami in Eastern and Northeastern India is attributed to the teachings of 15th and 16th century Sankardeva and Chaitanya Mahaprabhu. The people of Manipur perform Manipuri dance, enacting Raslila – a love inspired dance drama act of Radha and Krishna.

On this occasion, parents dress up their children as Krishna or gopiyan. Children play the game of Likkol Sannaba – a traditional board game played during the night of Janmashtami.

The temples are decorated with utmost beauty using flowers and leaves. The Bhagvata Gita is one of the primary highlights of this occasion. People recite or listen to the tenth chapter of the holy book. Several people observe fasts, recite the prayers and scriptures of Lord Krishna in Manipur.

The festival is also celebrated in Shree Govindajee temple, Imphal and also in several ISKCON temples, with great pomp and fervour.

The remembrance of Lord Krishna, on Janmashtami is marked not only in India, but also in many countries outside India, like Nepal, Bangladesh, Fiji, Pakistan etc.