Himachal Pradesh achieved 100 per cent first dose vaccinations but administering the second dose has proved tricky with winter setting in the mountain state. 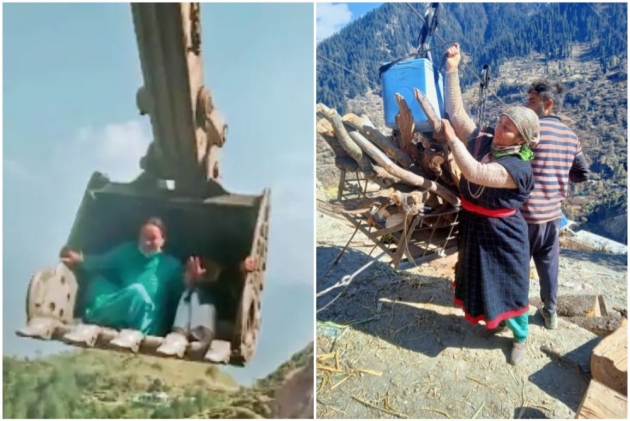 At 10,000 feet above sea level, a remote tribal village –Jalma in Lahaul valley in Himachal Pradesh - saw some ‘torch-bearers' on foot, braving minus 4 degrees temperature late Tuesday evening to ensure everyone in the region was vaccinated against Covid-19.

Even the absence of electricity, a usual occurrence Lahaul-Spiti during the winters, could not stop them from the mission to trace every single person who may have been left out of taking the second dose of the vaccine.

The volunteers are part of ‘Har Ghar Dastak’, the health department’s drive to achieve 100 per cent vaccination of the second dose by November 30. The time limit was set by Chief Minister Jai Ram Thakur himself.  The initiative relies on a network of mobile teams made of healthcare professionals and volunteers knocking on the doors of residents in even the most remote and inaccessible valleys and hamlets. In the past 15 days, the valleys have traversed hostile terrains and weather conditions in several largely inaccessible regions such as Kullu, Lahaul-Spiti, Chamba and Sirmaur.

The medical team led by Dr Gaurav Rana administered vaccination to natives of Jalma at their homes under ‘torch-light' and their mobile phone flash-lights. This was a first-of-a-kind experience for both the villagers and volunteers and according to Hemraj Bhairva, Mission Director National Health Mission (NHM), the mission has been a success.

Union Minister for health Mansukh Mandaviya was quick to tweet in appreciation for the teams travelling from village to village in geographically challenging mountainous valleys, many of which are currently reeling under bone-chilling cold, and power shutdowns.

“The teams start early in the day but it takes them hours to reach some villages located at mountain peaks or areas not accessible by vehicles. By the time they reach the targeted villagers, it's already sunset and pitch dark. Same way when the parties reached Jamla it was dark but they could not have returned without doing their task” Chief Medical Officer (Lahaul Spiti) Dr Madan Bandhu told Outlook.

Some of the elder citizens and sick, who have migrated from Lahaul-Spiti after the first dose are also being contacted over the phone and traced for the vaccination,  Bandhu said.

The challenges to achieve 100 per cent vaccination in the hill state of Himachal, which has already exceeded 85 per cent success second dose administrations last week, are enormous.

In Malana, an ancient village in Kullu with no road connectivity, for instance, officials were faced with two challenges. While the first was to manually transport the doses to the location, the second was convincing the locals to agree to take the vaccine doses.

The role of ASHA worker Nirma Devi, who hails from Malana and worked tirelessly against the community's vaccine hesitancy, has already been acknowledged by Prime Minister Narendra Modi. She managed to motivate the villagers despite rigorous religious traditions in the village which prevented villagers from taking any major decisions without consulting the local deity 'Jamlu devta'.

Speaking to Outlook over the phone, Nirma Devi said that the health department’s three-day camp to administer the second dose to residents in Malana began on Wednesday. All eligible persons in the area had completed the mandatory period of 80 days after their first dose.

The vaccine doses were transported to the remote village through “span” – an indigenously built single string ropeway used by locals to carry goods to the village. Wile reaching Malana on foot takes well over two hours, the span journey takes only 10 to 15 minutes.

Similar stories of creative solutions to scaling the inaccessibility problem were seen across Himachal Pradesh.

In a remote Mandi village, the home district of CM Thakur, the vaccination doses were ferried by JCB due to lack of connectivity between two mountain passes.

Such strategies and local solutions have played a key role in scripting Himachal Pradesh’s success in the vaccination drive.

The state is expected to complete the second dose of vaccination on November 30 but the health department says the next three days ie December 1, 2 and 3 have been kept as a cushion before the state is declared 100 per cent vaccinated on December 4. The event in Mandi is set to be attended by health minister Manadviya and National BJP president J P Nadda.

Till now, the state has administered 57.96 lakh eligible persons with the first dose of the Covid-19 vaccine and another 48.37 lakh have been inoculated with the second dose.

NHM Mission Director Hemraj Bhairva informed Outlook that exact data from the mobile teams and some of the remote areas of Lahaul-Spiti, Kangra, Sirmaur and Chamba is yet to come and will be available on November 30.

Districts of Kinnaur and Solan have already achieved 100 per cent vaccination in case of both doses.