Kumaraswamy Dismisses Speculations Of BJP-JD(S) Merger, Hits Out At Congress

Ruling out any merger proposals before him, Kumaraswamy, asserted that his aim is to ensure JD(S) emerges victorious in the 2023 Assembly polls and forms the government independently 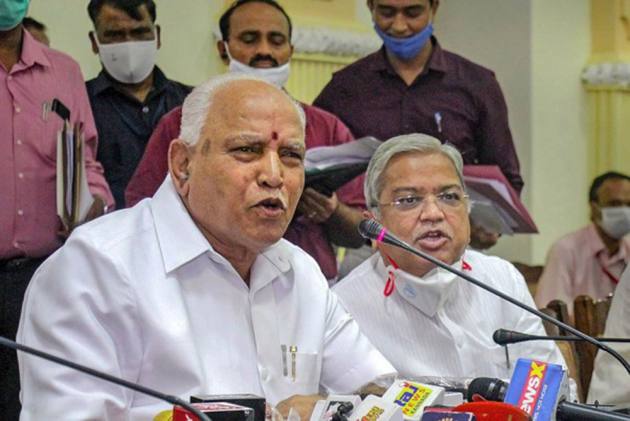 Karnataka Chief Minister B S Yediyurappa on Monday asked his BJP party members not to comment on rumours regarding a possible merger of the JD(S) with the saffron party, even as JD(S) leader H D Kumaraswamy dismissed such reports and expressed confidence about coming to power independently.

"My real politics will begin in 2023," Kumaraswamy said and asserted that no one can finish the JD(S).

Amid rumours of a possible merger of the JD(S) with BJP, both leaders had on Sunday issued statements dismissing them as far from the truth.

"JD(S) is a party built by former Prime Minister Deve Gowda and former Chief Minister Kumaraswamy is its leader. At a time when they are trying to strengthen the party, talking about it’s merger with another party is like insulting them," Yediyurappa said on Monday.

Speaking to reporters, the Chief Minister also said, neither he nor others should fuel such rumours, while maintaining that JD(S) has extended cooperation on the issue of removing the legislative council chairman.

Assembly elections will be held only two years later. Till then they will build their party, we will build ours. So no one, including those from our party, should speak about such things," he said.

There have been rumours and reports in certain sections of the media for a couple of months now about the merger, with Kumaraswamy twice meeting Yediyurappa personally at his official residence and JD(S)' alleged softening of stance towards the ruling party.

Also, JD(S) extending support for the passage of the land reforms bill in the council after initially opposing it and the regional party's support to BJP in its no-confidence motion against Council Chairman did add to the speculation.

Senior BJP legislator and vice president Arvind Limbavali's reply to a question about merger on Sunday was seen as adding credence to the speculation. "I too have heard about it (merger), I will try to know more about it. I have got to know through the media," he said.

Political polarisation will happen more in the days to come and there is a clear wave in favour of PM Narendra Modi and BJP in the country and in Karnataka too it will happen, he had said, pointing at a fight between two former coalition partners-- Congress and JD(S).

Ruling out any merger proposals before him, Kumaraswamy, hitting out at Congress and its leader Siddaramaiah, today asserted that his aim is to bring JD(S) to power independently in 2023, and blamed those who are on their way out from the party for spreading such rumours.

"I have already spoken about JD(S)' stand. There is no question of merging JD(S) with any other party until we are alive. We are not here for power. For the last ten years we have worked in the opposition," Kumaraswamy said.

Deve Gowda built JD(S) to fight for the cause of the people and during his six decade-long political life he was in power for just four or five years, the former Chief Minister said, while noting that joining hands with the Congress affected the party's prospects and expressed hopes about coming to power on own.

“My real politics will begin in 2023. Till today the politics that I was doing was temporary politics, some incidents have happened. I'm confident of getting full support from the people in 2023," he added.

Meanwhile, Congress legislature party leader and former chief minister Siddarmaaiah alleged that BJP and JD(S) always had an internal understanding and the regional party was the "B team" of the BJP.

"They already have an understanding. They (JDS) have supported the passage of anti-farmer legislation, they have supported removing chairman in the council, they will also support during the new Chairman election. It is hence proved that JD(S) is a B team of BJP," he said.