Jharkhand: Family Takes Pregnant Woman To Hospital On Motorcycle After Being Denied Ambulance

After travelling over 10 kilometres from her village, she was referred to the Latehar Sardar Hospital where she was once again ferried on the motorcycle. 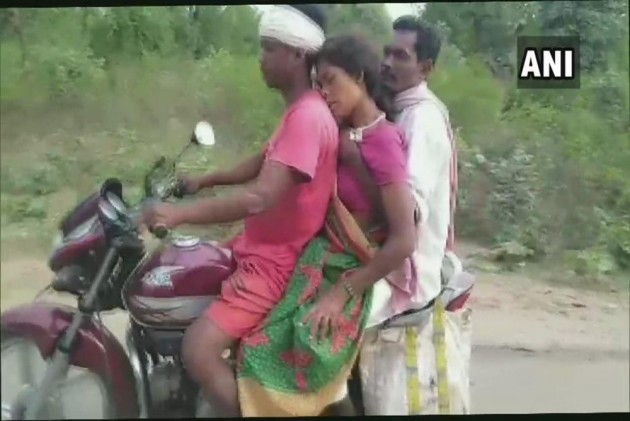 She is 4-months pregnant, and was unconscious and profusely bleeding. On Wednesday, Shanti Devi, a resident of Chatuag village in Jharkhand, was taken to a community health centre (CHC) on a motorcycle after the hospital refused to send her an ambulance, allege her family members.

And her ordeal didn't end there. After travelling over 10 kilometres from her village, she was referred to the Latehar Sardar Hospital where she was once again ferried on the motorcycle. Looking at her chronic condition, doctors referred her to the Rajendra Institute of Medical Sciences (RIMS) in Ranchi, where she was finally admitted.

The woman was reportedly referred to three different hospitals because of the unavailability of sufficient blood.

"My wife has been suffering from fever for the past three days and she was bleeding too. I dialled 108 to request an ambulance but we did not get it," said Kamal Ganjhu, Shanti Devi's husband.

District Civil Surgeon, Shivpoojan Sharma said: "Her haemoglobin count was too low when she came to the hospital. Our blood bank did not have an adequate amount of her blood group. Hence, we decided to shift her further".

"The allegations of the ambulance being denied are completely baseless. We were informed that the ambulance came within 40 minutes from the village. If one is in need of an ambulance, they must wait for some time," Shivpoojan said.

The surgeon also claimed that the condition of the woman is now stable and is being treated effectively at RIMS.