Seven persons were found dead and 17 others were rescued in an injured condition after a cloudburst hit Honzar village in Kishtwar district in the early hours of Wednesday. 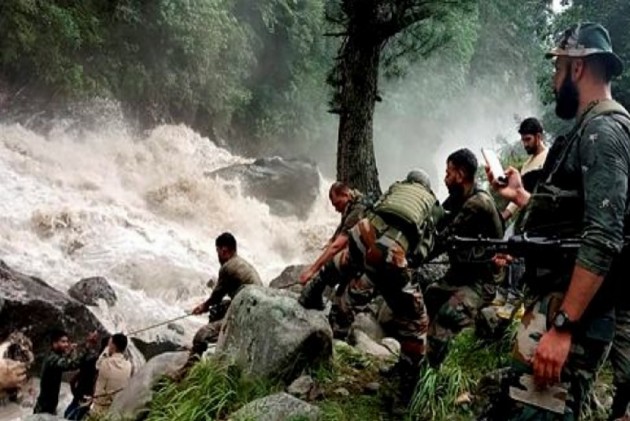 The joint rescue operation by police, Army and State Disaster Response Force (SDRF) is going on in full swing at Honzar village in Kishtwar district of Jammu and Kashmir, where a cloudburst hit in the early hours of Wednesday.

Rescue operations were underway on Thursday to trace 20 people, including nine women missing after the cloudburst.

Seven persons were found dead and 17 others were rescued in an injured condition after the remote village was struck by the cloudburst, damaging 21 houses, cow sheds, a ration depot, a bridge and a mosque.

Director General of Police-cum-Commandant General Home Guard, Civil Defence and SDRF, V K Singh said a team comprising SDRF and NDRF personnel left Jammu at 5:45 AM by road for Kishtwar, while another joint team is leaving Srinagar shortly to join the rescue operation.

Two more teams comprising SDRF and NDRF personnel are at the Jammu and Srinagar airports waiting for the weather to improve to get airlifted, he said.

He said three teams of the SDRF have already joined the rescue effort and efforts are on to locate the missing persons.

The Indian Air Force (IAF) made an attempt to airlift one of the teams on Wednesday but returned to the technical airport in Jammu due to inclement weather.

Singh along with divisional commissioner Jammu Raghav Langer was also on board the IAF chopper which attempted to take the SDRF team to the affected village.

The Jammu and Kashmir government had announced an ex-gratia of Rs 5 lakh each for the next of kin of those who lost their lives in the incident and Rs 50,000 each and Rs 12,700 under SDRF to the grievously injured persons.

“The J-K government would do everything possible to support and protect the affected families. In such trying times, it is our duty to care for those who have been unfortunately affected by these natural calamities," Lt Governor Manoj Sinha had said.

“Right now weather is generally cloudy at most places and is likely to become partly cloudy towards afternoon. Occasional light rain possible at some places during the day,” he said.

Most parts of Jammu region have been receiving incessant rains for the past few days and the Meteorological department has predicted widespread intermittent rain across Jammu and Kashmir till July 30.

“Heavy to very heavy rain is possible at some places and may lead to flash floods, mudslide, landslide and water logging (in low lying areas). People are advised to remain alert as water level has risen in all rivers (owing to incessant rains),” a spokesperson of the MET had said.

People have been advised to keep away from hilly, landslide and mudslide prone areas.