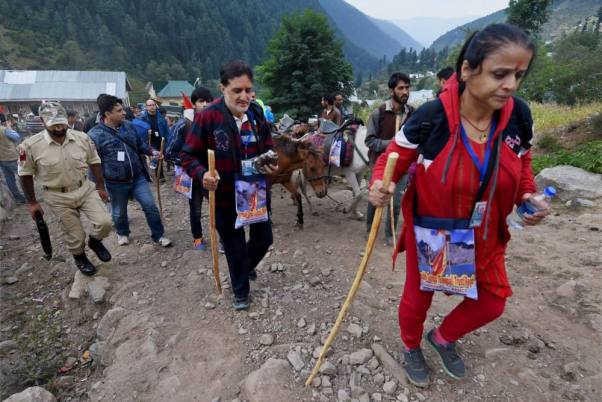 While conceding the law to stop distress sale of migrant properties particularly of Kashmiri pandits, is in vogue in J&K since 1997, the government today said “implementation of the law was a non-starter and replete with instances of non-performance.

To make the speedy implementation of the law, Lieutenant Governor of J&K Manoj Sinha Tuesday launched an online portal for time-bound redressal of grievances related to Kashmir migrants' immovable properties.

The application filed on the portal will be disposed of in a fixed time frame under the Public Services Guarantee Act, 2011 by the revenue authorities under intimation to the applicant, a government spokesman said.

The spokesman said Deputy Commissioner will undertake survey and field verification of migrant properties and update all registers, within a period of 15 days and submit a compliance report to the divisional commissioner, Kashmir.

Sinha said this initiative will put an end to the plight of the migrants including Pandits, Sikhs, and Muslims.

“I met numerous delegations from across the religion in the last 13 months and they unequivocally supported the return of migrants,” Sinha added.

The spokesman said nearly 60,000 families migrated from the valley during the turmoil, out of which 44,000 migrant families are registered with the Relief Commissioner, J&K, whereas, rest of the families chose to shift to other states.

“During the trial run period of the portal, we have received 854 grievances. It clearly shows a large number of migrant families were awaiting justice. Now, the time bound action on complaints will not only restore the faith of people in the system but I believe thousands of families achieve closure, justice and regain their dignity,” the Lt Governor said.

Under this Act, the concerned District Magistrate was designated as a Custodian of the migrant properties. The Act provides for certain restrictions to prevent distress sale, custody of immovable property, eviction of unauthorized occupants, an implementation by the competent authority, etc.

The government says the implementation of the law, was a non-starter and replete with instances of non-performance. “Despite various provisions, numerous instances of distress sale and alienation by different means have been reported. The cases under J&K Agrarian Reforms Act 1976 were neither properly enumerated nor contested,” the government spokesman claimed.

The government spokesman claimed ex-parte decisions were taken, and non-migrants have been shown as prospective owners. “Even in some cases, the tenancy has been created by showing non-existing tenants since 1971 by way of fraud/cheating, which was not permissible under section 13 of the said Act.”

The government spokesman said the instruction clearly states that any violation of the Act, including in respect of religious properties, will be taken cognizance by the competent authority with timely action for eviction, custody and restoration of such properties and also action under law against the violators.

“The revenue officers have been instructed to dispose of such cases on priority, with due consideration to the circumstances and specificity, while taking decisions with regard to the limitation period.”