J&K police handed over the bodies of the deceased businessmen on Thursday evening as the kins were agonizingly waiting in the sub-zero night temperature. 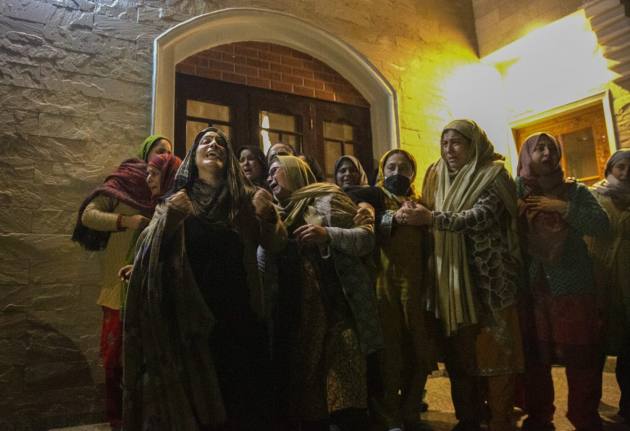 “I know you are angry and your blood is hot. I respect your emotions which can burst like a volcano but be peaceful,” said Abdul Majid, elder brother of slain Altaf Ahmad Bhat, 45, amid sobs and cries at the late-night funeral attended by hundreds of people mostly youth.

On Thursday late evening, the police returned the bodies of two civilians Bhat and Dr Mudasir Gul, who were killed on Monday evening along with Aamir Magray in a controversial security forces operation at Hyderpora locality in Srinagar. At Barzulla locality in Srinagar where the Bhat family lives, everyone was crying as his body was brought by the police at the midnight at about 12. 15 a.m.

The family along with hundreds of people in the area were awake, agonizingly waiting in the sub-zero night temperature for the body.

The J&K administration on Thursday morning promised the family that the bodies of Bhat and Dr Mudasir Gul would be handed over to them in the evening.

The police first cordoned off the Barzulla locality and for multiple times asked the mourning family members to push out the media persons from the area as dozens of reporters and photojournalists had come to report the happenings.

Police argued that the presence of the media was making it difficult for them to hand over the body early. The family maintained calm and the media remained there to see cover the incident.

As the police handed over the body of Bhat to his family, there were wailing and shrieks all around. He was taken to his newly built house where his daughters, his wife and other relatives had his brief but last glimpse.

The shrieks of mourners were coming from all sides. After around seven minutes, the body was taken to the local graveyard for burial. The police had sealed the roads and had warned the locals not to raise any pro-Azadi slogan. As the funeral procession of Bhat passed through the road at midnight, cries of people were becoming louder and louder.

Minutes before lowering his body to the grave, Bhat’s brother Majid stood up and asked emotionally charged youth to maintain calm. He thanked the media for covering their protests.

“This aroma of your fragrance is so soothing but it is maddening at the same time! Rest in peace my dearest,” wrote Altaf’s niece senior journalist Saima Bhat.

Altaf Ahmad Bhat and Dr Mudasir Gul, both residents of Srinagar, were killed along with Aamir Ahmad Magray, a resident of Jammu’s Ramban district by the police and the army in a controversial operation at Hyderpora bypass on Monday evening. Bhat and Dr Mudasir were two businessmen and Magray was a helper of Dr Mudasir.

Bhat had a commercial complex at Hyderpora. On the ground floor of the building, Bhat was running several shops. The first floor he had rented to Dr Mudasir. The police claim all three were killed in the operation that took place in the building. But according to the police’s own admissions, both Bhat and Dr Mudasir were called out by the police after assembling them at the one place along with other shopkeepers.

This is the second time that the bodies of persons buried under police watch is returned to their kin since the government from March 2019 adopted the practice of not handing over the bodies of people killed in the police and the army action to their relatives. Last year the police returned the bodies of three persons killed by the Army in Shopian on July 18 passing them off as militants. On August 10 the family members of three labourers from the Rajouri area of Jammu on the basis of photographic evidence had said the three “unidentified militants” killed in a gunfight in Shopian on July 18 are “in fact their relatives who had nothing to do with militancy and had gone to Shopian in search of work.”

Their bodies were handed over after 70 days.

The relatives of Bhat and Dr Mudasir were camping at Press Colony since Wednesday morning, to press for the return of the bodies.