PDP says only self-rule will secure lasting peace in J&K, while NC called the dismissal and arrest of former Prime Minister of J&K Sheikh Mohammad Abdullah the beginning of betrayals. 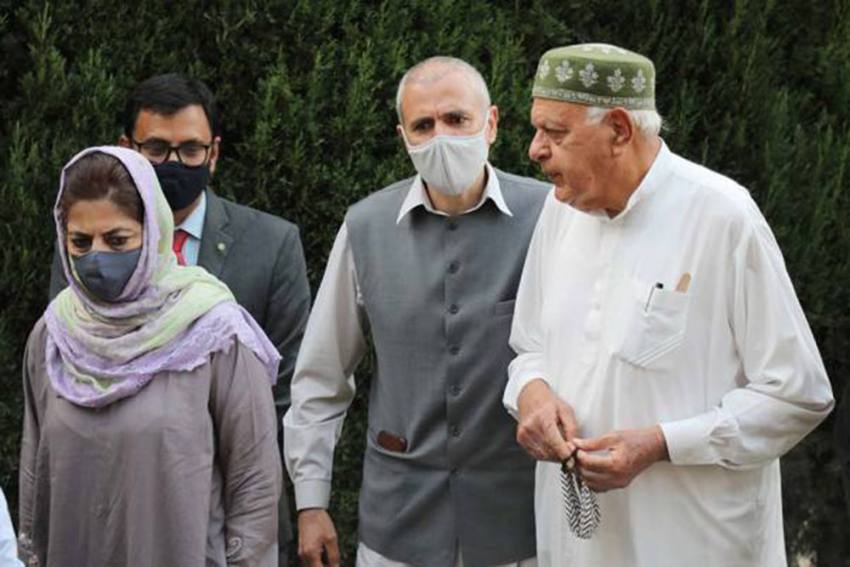 Former Chief Minister Mufti said only self-rule would secure lasting peace in J&K while the National Conference called the dismissal and arrest of former Prime Minister of J&K Sheikh Mohammad Abdullah the beginning of betrayals.

The PDP President Mehbooba Mufti said “the efficacy of self-rule in securing a lasting peace in Jammu and Kashmir which addresses both the internal and external dimensions of the problem.”

Chairing the first meeting of the youth PDP leadership from all the districts of the Valley since August 5, 2019, Mehbooba Mufti said there is a need to initiate a threadbare conversation on how PDP’s vision and roadmap has become all the more important given the current situation in the state and fast-changing geopolitical situation in the subcontinent.

“Self-rule is an internally consistent framework indicative of direction for the resolution of the issue of Jammu and Kashmir. It addresses the internal and the external dimensions of the problem in a manner that is realistic, practical, just and acceptable. It is a creative framework for resolution of the issue without compromising the sovereignty of the two nation states involved,” Mehbooba said.

Interacting with the leaders of the youth wing of the party from Kashmir province, Mehbooba said youth are the beacon of hope for bringing about a lasting change in the polity of Jammu and Kashmir.

The party chief spokesperson Suhail Bukhari gave a detailed presentation on the contours and elements of the self-rule road map and asked the participants to take the same to masses.

The meeting expressed anguish over the arrest of party youth Waheed ur Rehman Parra. “Waheed has been framed on frivolous charges and demanded his immediate release along with all other detainees of the state that are languishing in various jails of Jammu and Kashmir and other parts of the country.”

National Conference additional general secretary Dr. Sheikh Mustafa Kamaal said that the unconstitutional dismissal and arrest of Sheikh Muhammad Abdullah on August 9, 1953 marked the emotional rupture between New Delhi and Srinagar and the first tryst of J&K’s people with the betrayal of trust.

“The arrest of Sheikh Sahib on August 9, 1953 from Gulmarg has left a scar on the Kashmiri psyche that refuses to heal,” Kamaal said. “The fateful day marked an all-out attack on federalism in the country. The present sordid mess we are in is reminiscent of that era. Far from taking required corrections to remove the past foul memories, New Delhi made the entire third generation of Kashmiris relive that trauma,” he said.

Kamal said since the arrest of Sheikh the same politics of impropriety has been pursued in J&K by New Delhi, which since 1947 has been making promises to Kashmiris only to break them flagrantly. “Our expectations have from time to time been raised by “sky is the limit’, ‘Insaniyat, Jamhuriyat, and Kashmiriyat’ promises only to be dashed.  August 5, 2019 decisions were the culmination point of the undemocratic, unconstitutional, immoral project of New Delhi in JK,” he said.