Many parts of Jammu and Kashmir witnessed fresh snowfall on Saturday, leading to disruption of daily life 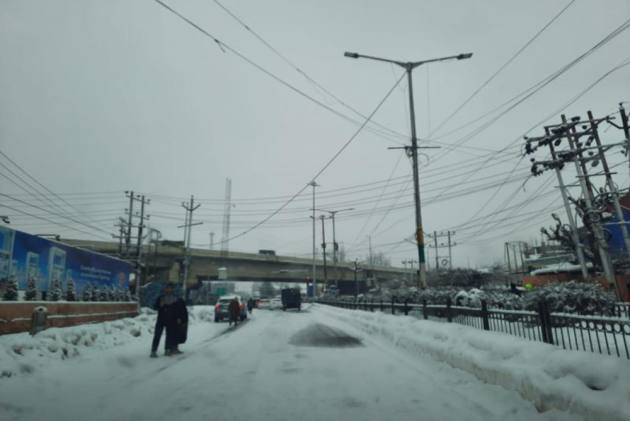 Even as the Jammu and Kashmir administration claimed that it has initiated snow clearing operations in about 18,000 kms of blocked roads, many locals say the government has not done enough.

Fresh snowfall was reported in various parts of the union territory on Saturday, which resulted in numerous accidents. However, troop movement remain unaffected, as tires of the army vehicles are fitted with snow chains.

The main road leading to the Srinagar International Airport witnessed heavy traffic jam on Saturday, with drivers finding it very difficult to navigate due to snowfall. Massive amount of snow was accumulated on both sides of the road leading to the airport.

Heavy Snowfall Cuts Off Kashmir Valley From Rest Of Country

Employees of the Roads and Buildings department resorted to manually spreading salt on roads in the absence of de-icing trucks that are usually used to spread road salt on highways, streets, and sidewalks. “It is like sprinkling salt on our wounds. One of our neighbours is a cancer survivor and we had to rush him to the hospital after he complained of acute pain. It took us hours to reach the hospital which otherwise is a 30-minute drive from Peerbagh,” a local resident said. Many locals also took to social media to highlight their grievances. On Friday villagers were compelled to carry the body of a woman on a stretcher for miles in Kathohalan area of Shopian district for burial.

The authorities say heavy snowfall has also affected water and power supply in various areas. But they say restoration work has been done promptly and the damages have been repaired. Divisional Commissioner Kashmir, Pandurang K Pole said out of the 441 water supply schemes damaged by snowfall, 407 have been restored so far. He claimed snow clearance work was taken out at all hospitals in Srinagar and the roads leading to districts hospitals are being cleared on a priority basis.