The teachers and the students of the JNU are demanding a total rollback of the proposed 10 per cent annual hostel fee hike. 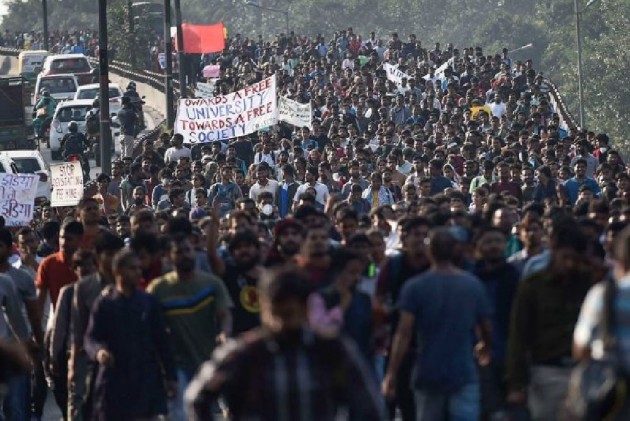 Also Read: Universities Like JNU Have Been Forced To Move Apart From The Nation

The teachers and the students are demanding a total rollback of the proposed 10 per cent annual hostel fee hike.

The students alleged the Delhi Police were "trying to break the backbone" of the protests by detaining union members. The JNUTA has extended support to students.

On Monday, hundreds of JNU students staged a march to Parliament to protest against the hike in hostel and mess fees. But the police stopped them mid-way. The students then staged a sit-in, which caused traffic snarls across central Delhi.

JNUSU President Aishe Ghosh said, "The police detained around a hundred students, including me and Satish (JNUSU General Secretary), just to prevent the meeting with the MHRD Secretary."

When the meeting took place late Monday night, we were told the V-C and Registrar would not attend, she added.

"The agitation will end only after all our demands are accepted, and if the V-C has a problem with that then we demand his resignation," Ghosh said.

The students are also demanding the restoration of reservation for SC/ST students in the hostel, rollback of the proposed hostel fee hike, and withdrawal of the proposal to include contractual workers' salary in the mess bill.

The students have conveyed these demands to the Ministry of Human Resource Development. "The protesting students should not face any enquiry," is another of their demands.