The Jawaharlal Nehru University Teachers Association (JNUTA) has accused the Vice-Chancellor accused the management of a cover-up, claiming that decision to suspend the faculty member was taken without a departmental enquiry. 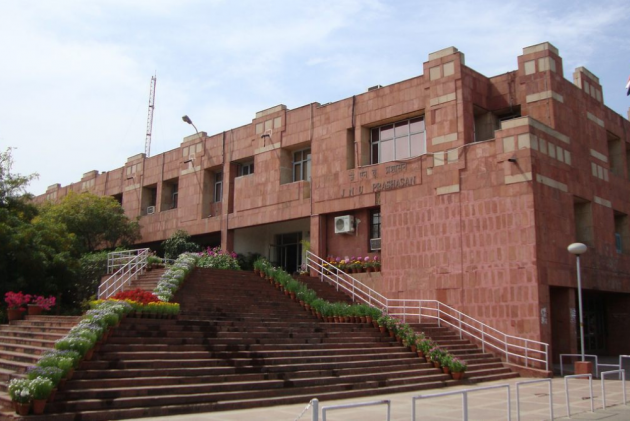 The Jawaharlal Nehru University Teachers' Association (JNUTA) on Saturday claimed that a senior faculty member of the varsity was suspended for alleged embezzlement of Rs 88.10 lakh without a departmental inquiry and accused the vice-chancellor of trying to "cover-up" the matter.

Referring to a re-advertisement by the Union Education Ministry for the post of vice-chancellor, the teachers' body alleged that it indicates the current VC will continue for an indefinite period.

An immediate reaction was not available as calls and messages to vice chancellor and Rector-I Chintamani Mahapatra remained unanswered.

What JNU Can Learn From Syama Prasad Mookerjee

In a statement, the JNUTA claimed that "a decision was taken to suspend a faculty member on September 30 on charges of embezzlement without a departmental enquiry."

In an emergency meeting of the JNU Executive Council held on September 30, the decision was taken to suspend a senior professor for alleged misappropriation of Rs 88,10,712, the teachers' body claimed.

It was also agreed that a police complaint will be filed, and the matter be transferred to the Central Vigilance Commission for further action, they claimed.

The decision was taken according to the findings of a fact-finding committee that had been instituted after the Executive Council met on September 2, it claimed.

They claimed that no papers were provided in advance to the EC members while deliberating on the matter, and also said "Kumar did not allow any discussion on the matter".

"Therefore at the time that the decision was taken to suspend the faculty member, EC members had no information on the the period when this alleged embezzlement or misappropriation took place, the modus operandi of the alleged misconduct, the details of the lapses in the procedure of financial approval and authorization of payments; and the break-up of approvals that add up to the total amount," the JNUTA statement read.

Citing Statute 30 of the JNU Act that deals with misconduct and removal of faculty, they claimed it is the responsibility of the VC to communicate and report forthwith to the members of the EC the "circumstances in which the order for suspension was made" and alleged that Kumar defied the statutes.

"This provides another illustration of a hurriedly executed cover-up of what appears to be a deeper and a larger case of financial bungling," they said.

The teachers' body also accused the Education ministry of "systematically destroying the university".

"The call for re-advertisement for the post of JNU vice chancellor brought out by the Ministry of Education, after nearly a year, speaks volume of not just its inefficiency
but its active connivance in systematically destroying the university," the statement read.

The current vice chancellor M Jagadesh Kumar is on extension after his term ended in January.

"JNUTA has consistently maintained that Professor Kumar's tenure as vice chancellor has been regressive and marked by several volatile moments. The re-advertisement offers a pretext for the continuation of Professor M Jagadesh Kumar for an indefinite period, allowing him the opportunity to further erode the university's autonomy," they alleged.

The Ministry had issued a directive on March 6 last year forbidding all in-charge vice chancellors of central universities to "refrain from taking policy decisions including recruitments", but that has not dissuaded Professor Jagadesh Kumar from following his own norms, the teachers' body alleged.

Meanwhile, the JNU unit of RSS-affiliated ABVP took out a 'Satyagraha Yatra' on Friday inside the campus and submitted a memorandum of demands to the Dean of Students and Librarian.

The Akhil Bharatiya Vidyarthi Parishad has been carrying on a 'Satyagrah' from September 11.

"The Dean of Students has accepted the main demand of hostel allotment. From now onwards, hostel allotment of new students of 2019 and 2020 will be done immediately after physical document verification, and students will be given Rs 2,000 as scholarship, which was Rs 800 earlier since they were not staying in hostels," the student outfit claimed.

They also claimed that the Central Library will be fully opened.