Students marched towards the Parliament for a complete fee rollback along with other demands. 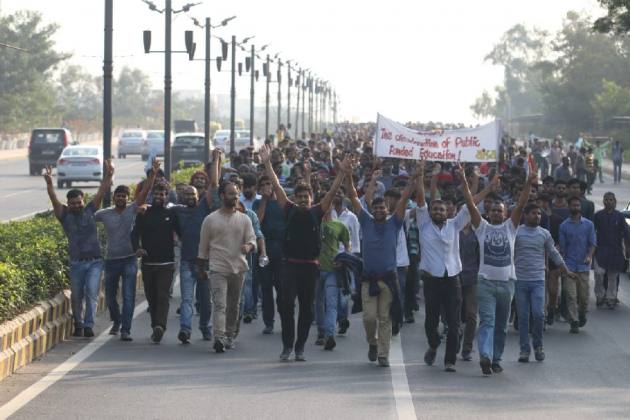 As the protesting students of JNU marched towards the Parliament on Monday, the first day of Winter Session, defying the prohibitory orders imposed in place, the police closed entry and exit points of three Delhi Metro stations near the Parliament.

The access to these metro stations was barred in order to thwart the protest march by the JNU students.

"As advised by Delhi Police, trains are not halting at Udyog Bhawan and Patel Chowk. Exit/Entry gates for Udyog Bhawan, Patel Chowk and Central Secretariat have been closed temporarily," the DMRC tweeted.

'It's Fight To Ensure JNU's Accessible To Everyone', Say Students Protesting Fee Hike

Thousands of Jawaharlal Nehru University students, carrying placards and chanting slogans, marched towards the Parliament, but were stopped by police around half a kilometre from the institute's campus in south Delhi

Demanding a complete rollback of the hostel fee hike, hundreds of JNU students on Monday started their protest march from the university campus towards the Parliament amid heavy police deployment.

The varsity's students have been protesting for nearly three weeks against the draft hostel manual, which has provisions for hostel fee hike, dress code and curfew timings.

The police said ten companies have been deployed outside JNU. One company comprises 70 to 80 personnel.

A senior official said police personnel are accompanying the agitating students during the march to ensure no untoward incident takes place.

Initially, the barricades outside JNU's gates were removed and the students were allowed to march. The police later stopped the march around 500 metres from the varsity's gates.

With posters in hands and chanting anti-fee hike slogans, hundreds of students marched on the streets of the national capital. This even as the Education Secretary earlier addressed their concern by a partial roll back and on Monday announcing a new committee, which will open dialogue with the students.

Akshat, a JNU student said, "The students' union has not been informed by the ministry about the formation of a panel. The administration officials and the panel should speak to the elected union to solve the issue."

Priyanka, another student said, "We are being given a lollipop in terms of the partial rollback. I am the first from my family to reach university. There are many others like me. Education is not the birthright of a privileged few."

Protests erupted in the JNU after the varsity had hiked the hostel fee and later rolled back partially.

The fee was, however, partially rolled back. Now, the room rent for single-seater rooms will be kept to Rs 600 per month, while it will be Rs 300 for those students who are from the below poverty line (BPL) category.

Similarly, the room rent for double seater rooms has been kept at Rs 300 per month for all while it is Rs 150 for eligible BPL category students.

Meanwhile, the HRD Ministry on Monday appointed a three-member committee to recommend ways to restore normal functioning of the JNU, officials said.