Mamata Banerjee, whose Trinamool Congress suffered reverses in the recent Lok Sabha elections, greeted people at Red Road here where a crowd of over 25,000 had gathered to offer 'namaz'. 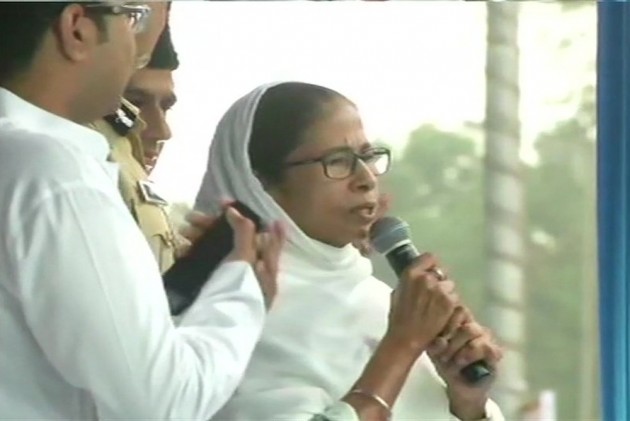 A combative West Bengal Chief Minister Mamata Banerjee Wednesday sent a strong message to her detractors on the occasion of Id-ul-Fitr, saying "whoever messes with us will be decimated".

Banerjee, whose Trinamool Congress suffered reverses in the recent Lok Sabha elections, greeted people at Red Road here where a crowd of over 25,000 had gathered to offer  'namaz'.

"Jo humse takraega wo choor choor ho jaega (whoever messes with us will be decimated). This is our slogan," she said in an apparent reference to the BJP which scripted a remarkable victory in the polls, bagging 18 of the 42 seats in the state.

Banerjee has also been critical of BJP's use of the slogan 'Jai Shri Ram', alleging that the saffron party was mixing religion with politics by repeatedly using the phrase.

The chief minister has lost her cool twice in the last few weeks over people chanting 'Jai Sri Ram' at some places in the state while her motorcade was passing through.

"Hindus stand for 'tyaag' (renunciation), Muslims for 'imaan' (integrity), Christians for 'pyaar' (love) and Sikhs for 'balidan' (sacrifice). This is our beloved Hindustan and we will protect it," she told the gathering on Wednesday.

"There is nothing to be scared... Sometimes when the sun rises, its rays are very harsh, but they later fade away. Do not be scared, the faster they captured EVMs, the quicker they will go away," Banerjee added.

The TMC supremo has been alleging tampering of electronic voting machines (EVMs) during the general elections, and in the run up to it.

"May this joyous festival provide an opportunity to reaffirm our faith in the country's cultural heritage, unity, spirit of friendship and fraternity among all sections of society," he said in a statement.