Navjot Singh Sidhu said, 'I would work with every member of the Congress family to fulfil the 'Jittega Punjab’ mission and strengthen the party’s organisation in the state. 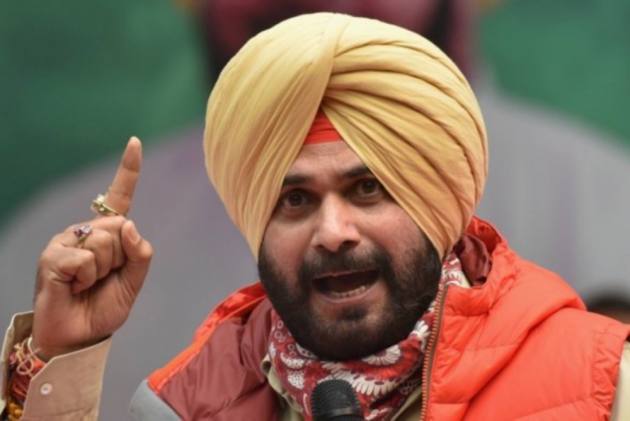 Congress leader Navjot Singh Sidhu's journey as the Punjab Congress president has "just begun", he said on Monday a day after being elevated to the post following his public dissent against Punjab Chief Minister Captain Amarinder Singh.

Sidhu said he will work with every member of Congress family in Punjab to fulfil mission of 'Jittega Punjab' ahead of the 2022 Assembly polls as a "humble party worker", to give power of people back to people through Punjab Model and the Congress High Command’s 18-point agenda.

"Today, to work further for the same dream and strengthen the invincible fort of the Congress in Punjab. I am grateful to Hon'ble Congress president Sonia Gandhi, Rahul Gandhi and Priyanka Gandhi for bestowing their faith in me and giving me this pivotal responsibility," he said on Twitter.

"Will work along every member of Congress family in Punjab to fulfil the mission of 'JittegaPunjab' as a humble Congress worker to give power of the people back to the people through the Punjab model and the high command's 18-point agenda ... My journey has just begun,” Sidhu said in another tweet.

He also shared a picture of his father with India's first prime minister Jawaharlal Nehru.

"To share prosperity, privilege and freedom not just among a few but among all, My father a Congress worker left a royal household and joined the freedom struggle, was sentenced to death for his patriotic work reprieved by the King's Amnesty became DCC President, MLA, MLC and advocate general," Sidhu added in a Twitter post.

They went straight to meet MLA Kuljit Singh Nagra at his residence in Mohali. Nagra was one of the four working presidents appointed by the Congress.

At Nagra's residence, sweets were distributed and a cake was cut.

Thereafter, he went to the residence of Jakhar who expressed confidence that the Amritsar East legislator would meet the expectations of people of Punjab.

Jakhar said that the party would fight the upcoming polls with a united face.

From Jakhar's residence, Sidhu along with some party legislators went to meet minister Razia Sultana.

He then went to the residence of former Punjab CM Rajinder Kaur Bhathal to seek her blessings.

Sidhu had been meeting party leaders for the past few days, even before his elevation as PPCC chief.

In Amritsar, several Congress workers and supporters beat drums and broke out in celebratory dance at the former cricketer taking charge of the riven-with-dissension state unit.

The Congress has also appointed four working presidents to assist Sidhu in the run-up to the assembly elections due early next year.

With the decision to ignore Amarinder Singh's opposition –- he is learnt to have told Sonia Gandhi he will not meet Sidhu till he publicly apologises for his attacks on him in the recent past –- the party leadership has clearly signalled it is putting its weight behind Sidhu.

The leadership feels Sidhu can lead the party's campaign with fresh energy and enthusiasm and help ensure its victory in 2022 assembly polls, party insiders said.

Sidhu now faces the challenge of uniting the party and bringing cohesion in its ranks, besides winning the trust of the old guard and veterans.

There has been no reaction from Singh over Sidhu's elevation to the post of the chief of the party's state unit.

Chief Minister Singh held a meeting at his official residence here with party leaders, including some ministers and MLAs.

"Some media reports suggesting that CM @capt_amarinder has invited @INCPunjab MLAs & MPs for lunch on July 21 are incorrect. He has not planned or sent invites for any such lunch,” tweeted the media advisor.