Justice At Last For Sex Workers?

The Supreme Court issued an order on December 14 directing the states and union territories to start the process of of issuing identity proofs for sex workers. How easy will be to implement? 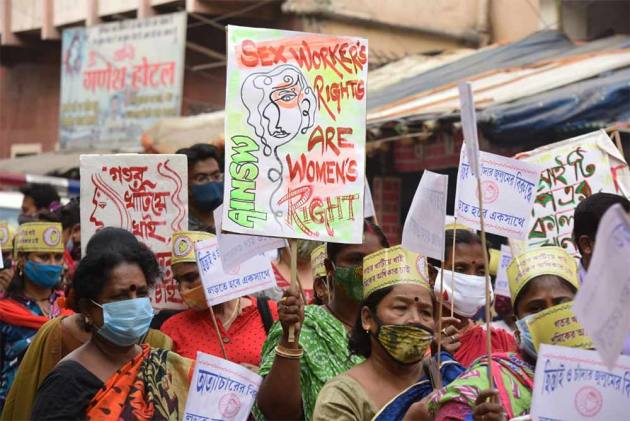 There was no way she could establish that she was a working professional in the city. She was caught in a never-ending loop, until five years back when Durbar Mahila Samanwaya Committee (a collective of 65,000 sex workers in West Bengal) came to her rescue by letting her open a bank account through an Usha cooperative. The passbook of this bank account eventually allowed Rita to finally obtain a voter ID card and subsequently an Aadhaar card.

“I was unable to save any money that I made because I didn’t have a bank account, without which I had to keep my earnings with the madams, and they would often take it.

“Before the cooperative helped me out, I had to spend almost all of my meagre income on getting basic groceries and ration for my home. And often the rest of them would be taken by madams,” said Rita who is the sole earner in her family of five.

While she still doesn’t have a ration card yet, but she manages to get subsidised ration with food coupons that were made available to sex workers by the state government last year in wake of Covid-19 pandemic.

Rita is among reportedly nine lakh sex workers across the country who continue to miss out on basic provisions needed to live with dignity due to lack of identity documents like ration card, voter ID or Aadhaar card.

So, when the Supreme Court issued an order on December 14 directing the states and union territories to start the process of of issuing proof of identity for sex workers, the community welcomed the decision, but also expressed scepticism over its implementation.

That is because this is not the first time that the apex court has issued such an order. In 2011, the SC had issued a similar order which was met with inaction on the parts of implementation authorities.

“Right to dignity is a fundamental right that is guaranteed to every citizen of this country irrespective of his/her vocation. There is a bounden duty cast on the government to provide basic amenities to the citizens of this country. The State government/union territories and other authorities are directed to commence the process of issuance of ration cards/voters identity cards immediately to sex workers from the list that is maintained by NACO,” the latest SC order has reportedly said.

The lack of identity cards and the problems faced by the sex workers came under the spotlight after the Covid-19 pandemic hit the country in March last year. With touch becoming a big ‘no’ to prevent the spread of the virus, lakhs of sex workers found themselves without work, and struggling to make ends meet.

While the state governments did offer relief in the form of ration and cash, most sex workers were unable to access them due to lack of ration, voter and Aadhaar cards, which is when organisations working towards welfare of sex workers stepped up to get the job done.

Ayesha Rai of National Network of Sex Workers (NNSW), a pan-India network of sex worker-led organisations and allies committed to promoting the Rights of Sex Workers in the country, says that because a large number of sex workers did not have any documents, it was difficult to even track them to ensure they got Covid relief.

“One of the major problems of not having identity documents for sex workers is that they get left out of government’s social security schemes. Last year so many of them were completely left out of the ambit of the Covid-19 relief because of that. We live in a country where an Aadhar card is mandatory even to get vaccinated!

“We found that local as well as migrant sex workers did not have Aadhaar card. Most of them didn’t even know that it was required to obtain the Covid relief,” Ayesha, a sex worker herself working out of West Bengal, says.

In Maharashtra’s Sangli district, at least 60 per cent of around 250 sex workers, including women, men and transgenders continue to remain without any identity documents, according to Kiran Deshmukh, a sex worker working out of the region for over 40 years.

While Kiran, who is also part of the non-profit organisation Sangram working for welfare of sex workers, was lucky to get her documents in place during a camp decades back at their brothel, many of her colleagues remain undocumented.

She recalls trying to arrange the documents for a colleague a few years back, and said the harassment was inexplicable.

“I had to make over 25 rounds to get this girl her documents. I spent so much of my own money just on traveling from one office to another, and we don’t make much. The process should not be this difficult. The authorities need to understand that most sex workers do not have the documents to begin with.

“Besides a letter from our organization, a letter from the MLA, we also had to go to her school where she studied till class four to get her school leaving certificate to establish that she is a resident of Sangli,” Kiran says.

The fact that she and her colleague had to undergo the harassment despite the 2011 SC order is what makes her sceptical about the latest order.

“We welcome the SC order. Of course, it is good for our community, but it is the implementation that has to be seen,” she says.

“‘Joote ghis jaate hain’ (in order to get an identity proof). Whenever I have gone to the offices to get the documents of fellow sex workers in place, I have cited SC orders, but they would send us back saying that they didn’t have information of any such order,” Sultana, who works as part of a Community Based Organisation (CBO) for the welfare of sex workers, says.

Unlike in cities like Delhi, Mumbai or Kolkata, sex workers in smaller towns like Ajmer do not work out of brothels but their own homes, or attend to clients in hotel rooms, making the need for identity proofs even more pressing.

“We practically can’t work here without any identity proofs, because whenever we take a client to a hotel, we need the documents. Besides that, ID proofs are also required at hospitals for medical procedures, both deliveries and abortions,” Sultana, who has been working as a sex worker since 2004, says.

She also points out that the process of getting the documents of sex workers in place also needed to be done discreetly, so that they are not marginalised by their neighbours.

“The families of a lot of sex workers (including herself) in Ajmer don’t know about their profession, so having a camp for sex workers exclusively doesn’t help.

“The governments and police need to work with CBOs to ensure that the documentation process happens without any marginalisation of the sex workers,” she says.