Did CM Pinarayi Vijayan feel threatened by the popularity of KK Shailaja, touted as the face of Kerala’s struggle against Covid and Nipah outbreaks? 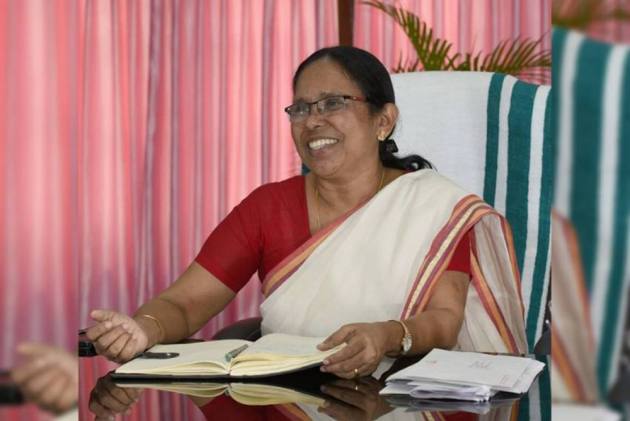 The Communist Party of India CPI (M)’s decision to drop former health minister KK Shailaja from the new Cabinet has come as a shock for many. Shailaja has been nominated as the party whip in the next Assembly. The party has also decided to induct new faces including Chief Minister-designate Pinarayi Vijayan’s son-in-law and DYFI national president Mohammed Riyas. The party has replaced all the old ministers with new faces except for CM Pinarayi Vijayan.

It was believed that KK Shailaja, who was touted as the face of Kerala’s struggle against Covid and Nipah outbreak will retain her cabinet position in the Pinarayi Vijayan 2.0 government as well. KK Shailaja won from Mattannur Assembly seat from Kannur by a margin of more than 60, 000 votes securing the highest margin in the Assembly.

Party sources said that though some members were in favour of a second term for Shailaja, majority rooted for a whole new team for the new Cabinet. In social media too, reactions have been pouring in since the state committee announced its decision. While some defended the party's decision, many social media users voiced strong protest against the party’s decision to drop ‘Shailaja teacher’, who led the state through many crisis situations.

Kerala Is Not Easier To Manage Than New York: K.K. Shailaja

Critics of the CPM say that the decision to drop Shailaja shows the party’s patriarchal and misogynistic character. Many also cited the experience of women leaders such as late K R Gouri and Susheela Gopalan, who they claimed were side-lined in the party for being women.

Earlier, there were media reports suggesting that Pinarayi feels threatened by Shailaja’s popularity and he wanted to kill competition by replacing her with a new face. However, a CPM leader dismissed such reports. “Party decision is ultimate. Individuals are not above party,” he said.

The CPM leader also pointed out that the party has decided to induct three women ministers into the new cabinet. The three women legislators who figured in the list include Veena George, R Bindu, and J Chinju Rani.

Reacting to the news, Shailaja also said that she adheres to party decisions and it’s paramount.

Earlier, there was an outcry from a section of the society which wanted Shailaja to be considered for the CM’s post.

The party sources also said that the CPI (M) has earlier taken the historic decision not to give tickets for two-time contestants. The party had benched popular ministers such as Thomas Isaac, K Sudhakaran, V S Sunil Kumar in this election, inviting scathing criticism from many quarters.

The CPI (M) state committee also announced that the party has selected MB Rajesh as the Speaker. TP Ramakrishnan has also been appointed as the Parliamentary Party Secretary, it said. The portfolios of the ministers would be announced later

The second Pinarayi Vijayan government in Kerala will be sworn in on May 20, with 21-member cabinet. The ceremony has already sparked a row after Pinarayi Vijayan’s announced 500 participants will attend the oath-taking ceremony. There was widespread criticism that the government should avoid extravaganza while the capital is under triple lockdown in the wake of a Covid surge.