Few days ago, Dr. Khan also wrote to the United Nations Human Rights Commission (UNHRC), thanking the body for urging the Centre to release him amid Coronavirus (COVID-19). 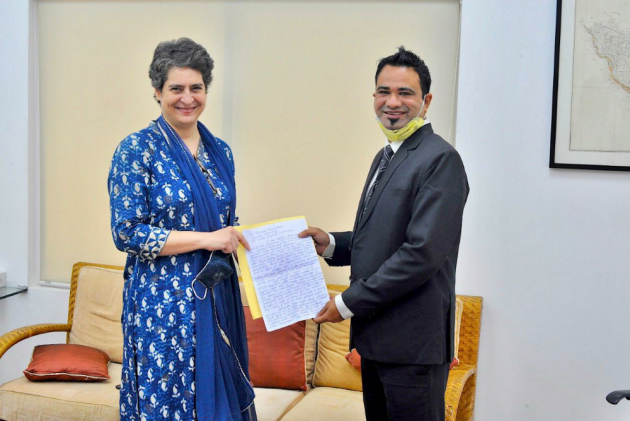 Speaking to Outlook Dr Kafeel Khan said, "I met Priyanka Gandhi along with my wife and children. I thanked her for all the support she has extended to me and my family which includes my release and arranging a safe stay for me and my family in Jaipur. I also urged her to raise help to those who have been framed under NSA and UAPA".

"I informed Ms Gandhi that I was lucky enough to have high court intervention which helped me to walk free from the jail but there are scores of innocent people, youth leaders and social activists who have been booked under this draconian laws for raising voices of dissent or protesting against the government policies. This needs to be stopped".

Few days ago, Dr. Khan also wrote to the United Nations Human Rights Commission (UNHRC), thanking the body for urging the Centre to release him amid Coronavirus (COVID-19). In the letter Khan had shared his traumatic experience through the Gorakhpur trial, his jail stint, and his subsequent release.

UP govt should revoke my suspension

In his one hour long meeting with Priyanka Gandhi, Khan a paediatrician by profession also highlighted that he is currently suspended in spite of his name being cleared by eight UP govt commissions. "Despite the Allahabad High Court dismissing the NSA slapped against me, the Uttar Pradesh government is yet to revoke my suspension. Either they allow me to resign or they revoke my suspension, because in the present situation I can't even apply for a new job". Khan was suspended in connection with Gorakpur Children death in the BRD hospital in September 2017 allegedly due to disruption in oxygen supply over unpaid bills to the vendor. However he was granted bail in April 2018 by Allahabad High Court, with the Court specifying that there was no evidence of negligence on his part.

Khan was arrested by the UP Special Task Force from Mumbai on January 29, 2020, for allegedly giving a provocative speech at the open talk in the Aligarh Muslim University in December 2019. After being transferred to Mathura Jail from Aligarh, he was detained in spite of being granted bail, as NSA charges were slapped against him.

In September 2020 , the Allahabad HC ruled that Khan's speech gives a call for national unity and rejected grounds for detention under NSA.