Kamal Haasan On SP Balasubrahmanyam: He Was Part Of My First Love, Marriage, And Melancholy

Balasubrahmanyam, 74, died on Friday after being admitted to a hospital on August 5. He had tested positive for COVID-19. 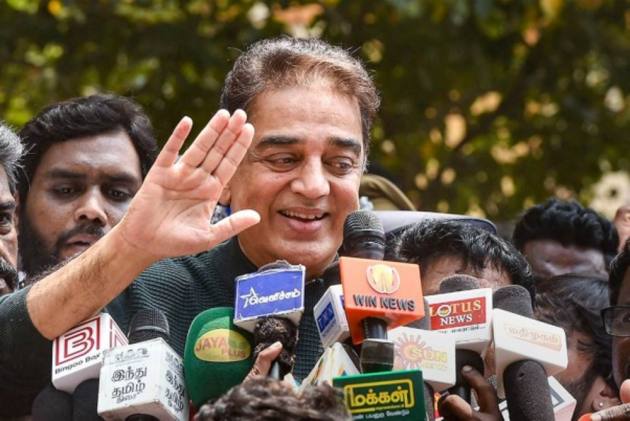 Balasubrahmanyam, 74, died on Friday after being admitted to a hospital on August 5. He had tested positive for COVID-19.

In his glorious career of over 50 years, SPB, as the singer was fondly called, was known as the voice of Haasan, not only dubbing for his films in Telugu but singing songs for him, most notably in the 1981 blockbuster "Ek Duje Ke Liye".

The film marked the singer's Hindi debut and he continued singing for Haasan in movies like "Zara Si Zindagi", "Ek Nai Paheli", "Dekha Pyar Tumhara" and "Appu Raja" among others.

Over a virtual press conference, the 65-year-old actor described SPB as his "greatest public relations man" as he would always shower love and praise on him.

"I heard him first before I saw him. Like everyone else, he has been a part of my romance, melancholy, part of my happiness, first love, and marriage as well.

"I used to complain to him that it's only your songs that got me into marriage! That's the kind of relationship (I had with him)," Haasan told reporters.

The actor said it would be impossible to recollect the first time he met SPB as it's similar to recalling "the first time you saw your mother”.

Haasan credited fans for their union as artistes.

"We were knitted together by popular choice. It was not like we chose each other. The audience chose us. Since they loved us as a pair, we started falling in love and later became brothers."

A six-time national award winner, Balasubrahmanyam, who had sung over 40,000 songs, was also honored with Padma Shri in 2001 and Padma Bhushan in 2011.

Haasan said though his achievements were endless, Balasubrahmanyam was not a man blinded by success.

"He never carried his fame with him. When he completed recording 30,000 songs, I wanted to speak about it but he requested not to as it won't look nice, look like we are showing off. That's what I liked about him. He took criticism and applause in the same way...

"To sing more than 40,000 songs is not an easy feat. If COVID had not hit him, he would still be singing, recording every day. He died with his boots on."

Haasan said limiting him to just one state would be objectionable to his fans in other regions.

"He is not just a Tamil or Telugu singer. He is a national voice and that's how we should celebrate him."

The singer's legacy, Haasan said, would be that of kindness.

Balasubrahmanyam's humility "was not a mask" and he would often extend the same kindness he received as a young singer to the new artistes working with him, the actor said.

"He wanted to improve, he admired new talents and worked with them kindly. He never forgot the kindness which was offered to him as a young singer and imparted it to those young talents who worked with him. That's why he could move with times.

"I never spoke about his singing. The world did. I would just be there, brimming with tears, proud of my brother," Haasan said.