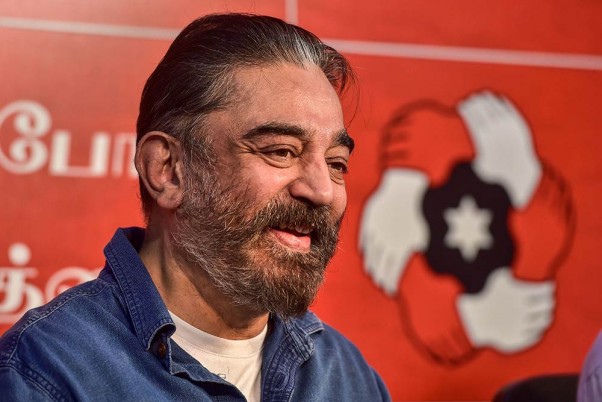 Actor-turned politician Kamal Haasan is all set to make his electoral debut by contesting from Coimbatore South constituency in the Tamil Nadu assembly elections scheduled for April 6. The Makkal Needhi Maiam (MNM) chief released the second list of his party's candidates and made the announcement in Chennai on Friday

Remembering his late father Sreenivasan, Haasan expressed confidence that the people of his constituency would enable him to voice his views in the assembly by voting for him.

"My father's dream was I should become an IAS officer and then enter politics. Though I could not realise his dream (of becoming an IAS officer), my party comprises many (former) IAS officers. That is a proud moment for us," he told reporters.

DMK President M K Stalin will try his luck once again from Kolathur constituency in the city for the April 6 Tamil Nadu Assembly elections while his
son Udhayanidhi will make his electoral debut by contesting from the Chepauk-Triplicane segment in the metropolis.

Stalin released the list of all 173 candidates for the elections, retaining most sitting MLAs including seniors Durai Murugan, K N Nehru, K Ponmudi and MRK Panneerselvam-- all former ministers, besides others.

Addressing a press conference at the DMK headquarters Anna Arivalayam here, Stalin said he will file the nomination, which started Friday in the poll-bound state, on March 15 and embark on the next leg of the campaign.

The DMK, out of power since 2011, is eyeing a comeback by dethroning the ruling AIADMK and has stitched up a rainbow coalition comprising the Congress, the Left, MDMK, VCK and other smaller outfits, apportioning them a total of 61 of the 234 seats at stake.

Since many of the parties including the MDMK will be contesting on DMK's Rising Sun symbol, the lead partner will be effectively in fray in 187 seats, Stalin added.