A spokesperson said an inquiry is already on and action will be taken against the guilty based on its findings. 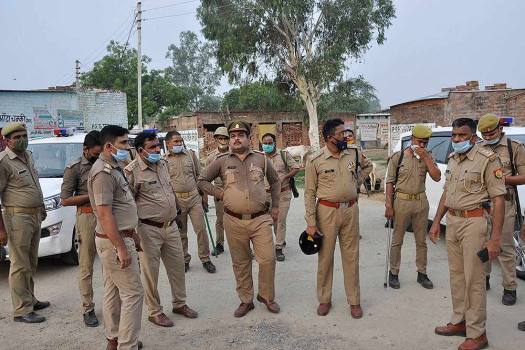 All 68 police personnel at Chaubeypur police station in Kanpur were shunted to the reserve police lines on Tuesday with the top brass saying they suspected their integrity after last week’s ambush which killed eight policemen.

A spokesperson said an inquiry is already on and action will be taken against the guilty based on its findings.

The drastic move Tuesday night followed soon after police announced the transfer of a DIG, who till recently was the Senior Superintendent of Police in Kanpur.

He was transferred from the state’s Special task Force (STF) to the Provincial Armed Police (PAC) unit in Moradabad.

Police also arrested three more people in connection with the killing of the eight police personnel, ambushed early Friday when they were out on a raid to arrest gangster Vikas Dubey in his Bikru village near Kanpur.

Rekha’s husband Dayashankar Agnihotri, a key member of Dubey’s gang, is already behind bars, arrested Sunday after an encounter in which police shot him in the leg. Two other alleged members of the gang were killed in an encounter last Friday.

Police believe that the gangster was tipped off by someone from Chaubeypur police station, giving him time to lay an ambush. Station Officer Vinay Tiwari and three other policemen are already under suspension.

No reasons were given for shifting DIG Anant Deo, whose transfer was part of a shuffle which included three other officers.

But only hours earlier, Inspector General (Civil Defence) Amitabh Thakur made it known that he has written to state police chief H C Awasthy seeking an inquiry against Deo and his transfer while the probe is on.

Thakur alleged that as SSP, Deo was close to an associate of gangster Vikas Dubey.

Deo was the Kanpur SSP in March when Deputy Superintendent of Police Devendra Mishra purportedly wrote a damning letter, which surfaced on social media after he was killed in the Bikru ambush.

The unverified letter to the then Kanpur SSP alleged that Chaubeypur station officer Vinay Tiwari had watered down an FIR lodged against the gangster. It suggested that Tiwari and Dubey were close.

Police said there is no record of the purported letter, which is undated and carries no serial number. Anant Deo also said that the signature on it does not match that of the slain officer.

But police said they will still investigate into the letter seen on social media.

Lucknow Range IG Lakshmi Singh on Tuesday began a probe into it, visiting the office of Circle Officer (Bilhaur), the post held by the killed DSP. The IG questioned the staff, checked records and computer data, said an official.

She also seized a computer hard disk, pen drives and some documents, the official said.

Police have named 21 people in the FIR registered after the attack. The FIR also mentioned 50-60 unidentified people.

Vikas Dubey, with a reward of Rs 2.50 lakh on him, remained elusive.

IG Amitabh Thakur had sought an inquiry into the alleged closeness between Deo and Jai Bajpai, a “frontman” of gangster Dubey.

A video clip from 2017, apparently shot while Dubey was being interrogated by the STF after his arrest in Lucknow, has also appeared on social media.

In the clip, the alleged gangster suggests he has links with two local BJP MLAs, Bhagwati Sagar and Abhijeet Sanga, and the district panchayat chief.

He is heard claiming that Sagar and Sanga had helped him in the past when he faced police action.

Both leaders denied this.

"My constituency is Bithoor in Kanpur and people from the adjoining village come to me for help,” said Sanga. He added that on several occasions he had recommended action in support of people who were against Dubey.

Bilhaur MLA Sagar said the clip was being circulated to malign his image.

The two MLAs said Dubey usually associated himself with leaders belonging to the ruling party in the state. They demanded an inquiry into the matter.