With the Assembly strength reduced to 208 from 225, including a nominated member after Speaker K.R. Ramesh Kumar disqualified 17 Congress-Janata Dal-Secular rebel legislators, 105 is the new halfway mark for simple majority, which the BJP has. 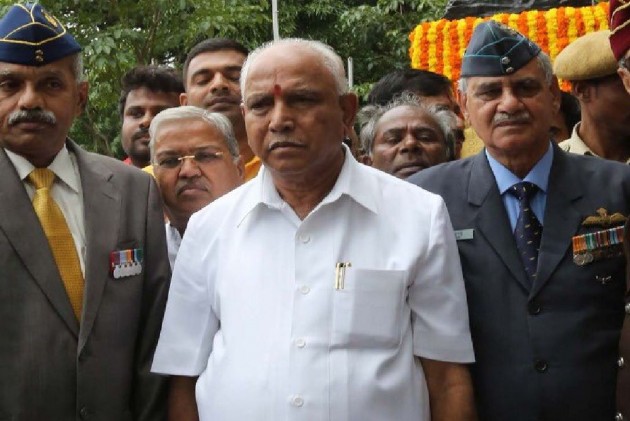 Karnataka's ruling Bharatiya Janata Party (BJP) on Sunday night issued a whip to all its 105 legislators to attend the Assembly on Monday from 11 a.m. when the trust vote will be moved by Chief Minister B.S. Yediyurappa for proving majority, a party official said.

"The whip was issued at our legislature party meeting in the presence of Yediyurappa and all the MLAs at a hotel in the city. All the legislators have been told to be present in the Assembly by 11 a.m.," BJP spokesman G. Madhusudan told IANS in Bengaluru.

The chief minister seemed confident of winning the floor test to prove majority in the state Assembly.

With Disqualification Of 14 Rebel Karnataka MLAs, Strength Comes Down To 208; It's Advantage BJP

"As all our 105 legislators are united and together, we are sure to pass the floor test in the Assembly whose effective strength has reduced to 208 from 225 after 17 rebel legislators of the Congress-JD-S were disqualified and the revised halfway mark to win the trust vote is 105, which we have," BJP's state spokesman G. Madhusudana told IANS

About 100 of the saffron party's 105 legislators have been staying at a private resort in the city's northern outskirts since July 12 when the 10-day monsoon session of the Assembly commenced and the month-long political crisis led to the fall of the 14-month-old JD-S-Congress coalition government on July 23 after its Chief Minister H.D. Kumaraswamy lost the trust vote.

"Though the Governor (Vajubhai Vala) directed the new Chief Minister to prove majority by July 31, Yediyurappa had announced on Friday that he would face the floor test on July 29, as the Finance Bill had to be moved later in the day and passed by July 31."

With the Assembly strength reduced to 208 from 225, including a nominated member after Speaker K.R. Ramesh Kumar disqualified 17 Congress-Janata Dal-Secular rebel legislators, 105 is the new halfway mark for simple majority, which the BJP has.

" ...in our Legislative Party meeting, we have discussed in detail about Monday's programme in the Assembly. Tomorrow (Monday) I will move the confidence motion in House. After that I will introduce Finance Bill as well," Yediyurappa said.

"I think both the Congress and the JDS are going to support us in this matter," he added.

"With the support of Independent H. Nagesh, our party's strength is 106, one more than the halfway mark to win the trust vote," Madhusudan said.

If Congress legislator B. Nagendra, who is in a private hospital in Bengaluru for treatment, and Bahujan Samaj Party member N. Mahesh abstain from the Assembly as they did on July 23, the effective strength for the floor test will be 206, with 104 as the magic figure for proving majority.

Post-disqualification, the strength of the Congress has reduced to 64 from 78, excluding the Speaker and that of JD-S to 34 from 37.

On July 23, with 20 legislators - 15 rebels, two sick Congress MLAs, two Independents and the BSP member - absent, the Assembly strength was 205, with 103 the mark for majority.

The JD-S-Congress coalition lost the motion as their combined strength was 99 against 105 of the BJP.