'The names you are speculating on TV channels are far from the truth, unnecessarily don't take names, I will release the list by evening,' Karnataka CM Yediyurappa said. 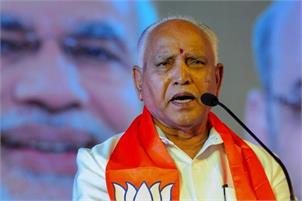 After a successful meeting with BJP leadership on Sunday, Karnataka Chief Minister B S Yediyurappa is expected to set the cogs for the much-anticipated cabinet expansion in motion.

It is likely to take place on January 13 and a list of new ministers who will be inducted will be released by the evening.

"I have planned to hold the swearing-in of new Ministers at 4 pm tomorrow if everything goes accordingly," he said. The chief minister has indicated that seven new faces will be included in the reshuffled cabinet but has maintained a veil of suspense on who will be left out.

"The names you are speculating on TV channels are far from the truth, unnecessarily don't take names, I will release the list by evening," Yediyurappa said.

Speaking to reporters here, he said with the swearing-in most likely at 4 pm tomorrow, those who will be taking oath will be informed later in the evening today. Asked if any of the Ministers will be dropped from the cabinet, he merely said, "it will be known tomorrow."

The CM had on Monday said that the BJP National President J P Nadda and the party General Secretary in-charge of state Arun Singh will be invited for the swearing-in. On Sunday he had held discussions with Nadda and Union Home Minister Amit Shah in New Delhi about the cabinet exercise, following which he indicated that seven members will be inducted.

There are speculations within the BJP circles, also in the section of media that a couple of Ministers are likely to be dropped. Amid such speculations, Excise Minister H Nagesh and Women and Child Development Minister Shashikala Jolle had maintained that they had not heard from the Chief Minister or the party leadership in this regard.

Yediyurappa has been waiting for some time now to carry out the cabinet exercise, as he was asked by BJP national president J P Nadda during their meeting in New Delhi on November 18, to wait for the clearance from the central leadership.

The cabinet expansion or reshuffle is expected to be a tightrope walk for the Chief Minister, considering that there are too many aspirants, from the party old guard to Congress- JD(S) rebels who are now BJP legislators.

While several of the old guards like Umesh Katti, G H Thippareddy, M P Renukacharya, Arvind Limbavali are waiting for a chance to be inducted into the Ministry, Congress-JD(S) rebels like Munirathna, R Shankar and M T B Nagaraj, who helped the BJP come to power and are now party legislators, are also aspiring for slots.

Yediyurappa had recently also indicated that MLC C P Yogeshwar, who is said to have played a key role by managing Congress-JD(S) rebel MLAs, during the political turmoil in the state in 2019, that eventually led to BJP to come to power, will be inducted into the Ministry. However, few MLAs are opposed to it, as Yogeshwar is not directly elected by the people and that his induction would scuttle their chances.

The cabinet currently has 27 members, and seven berths are still vacant.