Under the new law, slaughter of cattle would lead to imprisonment of up to 7 years and a fine ranging from Rs 50,000 to Rs 5 lakh. 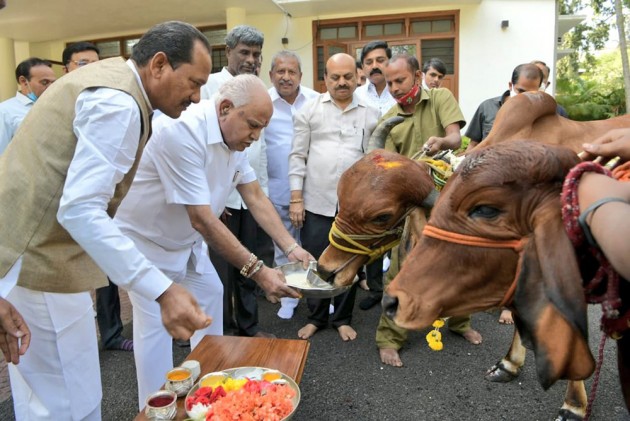 To celebrate the passage of the anti-cow slaughter bill in the Karnataka Legislative Council, state Chief Minister B S Yediyurappa on Tuesday offered special prayers to cows in Bengaluru.

The Karnataka Prevention of Slaughter and Preservation of Cattle Bill, which was first passed by the state Assembly, faced a roadblock in the legislative council. After immense opposition from the Congress and the JDS, the bill was passed on Monday. The bill was one of the key promises made by the BJP in its election manifesto.

Flanked by his cabinet colleagues, including animal husbandry minister Prabhu Chauhan and home minister Basavaraj Bommai, the CM put vermilion and turmeric powder on the forehead of the 'Go Mata' and showered 'Akshat' and flowers on them, at his residence in Bengaluru. After garlanding the cattle, Yediyurappa offered them raw rice, lentils and banana.

Karnataka is among a few select states in the country which has tough provisions against those transporting, smuggling and slaughtering cows and buffaloes below the age of 12.

Under the new law, slaughter of cattle would lead to imprisonment of up to 7 years and a fine ranging from Rs 50,000 to Rs 5 lakh.

Congress and the JD(S) have been opposed to the bill saying it intends to target the minorities. They alleged that the BJP was not aware of the ground realities as there are many cobblers solely dependent on cow hides to make a living.