The controversial Karnataka Prevention of Slaughter and Preservation of Cattle Bill, 2020, was passed in the Assembly on Wednesday. 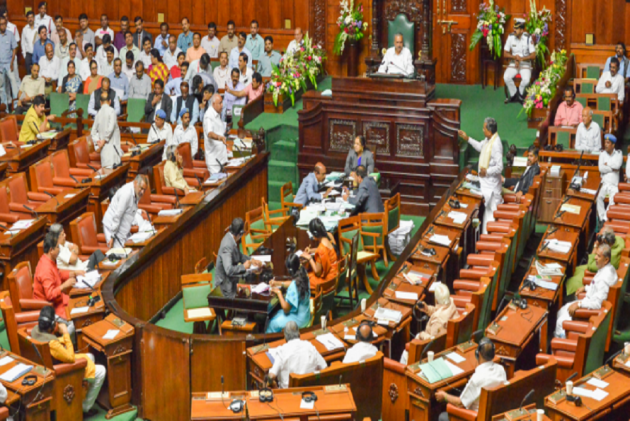 Opposition Congress in Karnataka boycotted the proceedings of the legislative assembly on Thursday, the last day of the winter session, in protest against the introduction and passage of the anti-cow slaughter bill, despite repeated request by the Speaker to participate.

The controversial Karnataka Prevention of Slaughter and Preservation of Cattle Bill, 2020, was passed in the assembly on Wednesday amid protests by the Opposition. Leader of Opposition Siddaramaiah on Wednesday had announced that Congress will boycott the assembly session on Thursday in protest, terming it as ''anti-democratic act.''

Congress MLAs participated in the legislature party meeting instead of attending the assembly proceedings today. As the Congress members were not present in the assembly when the House met for the day, Speaker Vishweshwar Hegde Kageri made an appeal to them to participate.

"Opposition leader Siddaramaiah and Congress legislators had yesterday announced that they will boycott the assembly proceedings today and none of them are participating today. I appeal to them to participate in the proceedings," Kageri said.

Addressing from the Chair, he said the leader of the opposition has spoken a couple of things about him regarding the passage of the cow slaughter bill, and clarified that he has conducted the house within the framework of set rules and procedures.

Siddaramaiah and Congress had on Wednesday accused the Speaker of conducting proceedings in a ''partisan'' manner by allowing the introduction and passage of the bill. He said it was against the decision of the Business Advisory Committee (BAC) and the subject was not even mentioned in the day's agenda.

At the BAC meeting, it was clearly discussed and decided that ordinance and important bills can be taken up, the Speaker pointed out as he read out his statement made to this effect by him in the House on Tuesday. "... so it is not right to say things were against the BAC decision."

Kageri also rejected the LoP's charge that the bill was passed without discussion, by stating that several members from the ruling side expressed their opinion about the bill, following which he repeatedly asked protesting Congress members to participate in the discussion. "They not participating despite repeated requests is not my responsibility."

Conceding that though it was not mentioned in specific at the BAC that the anti cow slaughter bill will be taken up, Law and Parliamentary Affairs Minister J C Madhuswamy said, however, it was made clear that a couple of important bills will be introduced during the session.

He said only after realising that the legislative council will also be adjourned sine die on Thursday, the cow slaughter bill was introduced in the assembly, with an intention to get it passed in both the houses during the same session.

"During the last sessions some bills passed by the assembly got held up in the council without getting passed and we (government) had to promulgate an ordinance. It looks as though we are only promulgating ordinances. Governor also had questioned," he said, as he asked the Congress legislators to participate in the proceedings and debate on the BBMP bill.

Minister R Ashoka hit out at Congress for making allegations on the chair and the government, pointing to its conduct in the past while in power. He said the cow slaughter bill was on our agenda, we had nothing to hide in it, and Congress cannot dictate terms on how to conduct the House.

The Speaker then adjourned the House for some time to make efforts to convince the opposition leader and Congress MLAs to get back to the House. When the House resumed, as the Congress legislators did not participate in the proceedings, citing that the legislature party meeting was on, the Speaker continued with the proceedings.