Even though all 21 Congress ministers resigned from their respective portfolios, followed by a similar exercise by their JD(S) colleagues, in a last-ditch attempt to save the government, the situation appeared to have all but slipped through their fingers. 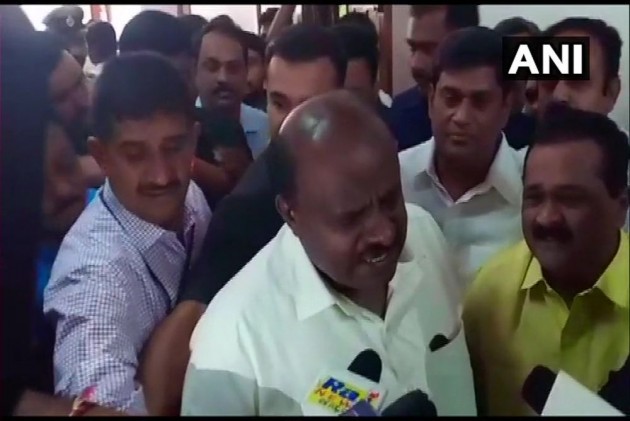 Senior leaders from both Congress and JD(S), the ruling coalition in Karnataka, on Monday continued firefighting the rebellion which has pushed the state government to the brink of collapse.

Even though all 21 Congress ministers resigned from their respective portfolios, followed by a similar exercise by their JD(S) colleagues, in a last-ditch attempt to save the government, the situation appeared to have all but slipped through their fingers.

Despite HD Kumaraswamy's repeated assurances that the government would survive, the crisis deepened with two Ministers and Independent MLAs -- H Nagesh and R Shankar -- resigning from the cabinet and withdrawing their support to the coalition.

Incidentally, the two were inducted into the cabinet last month after a fresh bout of dissidence to prevent them from siding with the BJP.

On Monday night, former chief minister BS Yeddyurappa told the media that the BJP had the support of at least 107 MLAs, adding "Let's wait and see."

The issue echoed in Parliament where the government denied any role in the political turmoil even as Congress accused it of hatching a conspiracy.

"Big leaders of Congress are resigning," he said.

The government has plunged into a crisis with 13 MLAs -- 10 from the Congress and three from the JD(S)-- submitting their resignations from the assembly on Saturday.

BJP, on its part, demanded the immediate resignation of Kumaraswamy, saying his government was in 'minority'.

"If at all he has dignity, honour and self-esteem, or if he is aware of Karnataka's culture and traditions, he should immediately resign... Do not try to stick on to the chair. You do not have the numbers," former deputy CM R Ashok said.

Ministers of Congress and JDS resigned in an effort to accommodate the disgruntled MLAs in the cabinet, but the dissidents seem unmoved, as they stayed put in a Mumbai hotel.

Nagesh joined them in the western metropolis while Shankar, who was the latest to quit, was on his way there even as Congress leaders kept maintaining that the crisis would blow over and there will be no need for a number crunch.

The JD(S)-Congress coalition's total strength after Nagesh and Shankar withdrawing their support is 116 (Congress-78, JD(S)-37 and BSP-1), besides the Speaker.

With the support of two independents, the BJP has 107 MLAs in the 224-member House, where the half-way mark is 113.

If the resignations of the MLAs are accepted, the coalition's tally will be reduced to 103. The Speaker also has a vote.

On a hectic day of political activities, Congress took the lead to save the government, holding the meeting at the residence of Deputy Chief Minister G Parameshwara, which was attended by senior leaders, including AICC general secretary K C Venugopal.

At the end of the meeting, the party said all its 21 ministers resigned voluntarily to enable a reshuffle of the cabinet and make way for the disgruntled legislators.

"For the larger interest of the party, yesterday and today, we had detailed discussions with senior leaders and ministers," Venugopal told reporters.

The meeting was attended by Congress Legislature Party Leader Siddaramaiah among others.

Siddaramaiah too said all Congress ministers have voluntarily resigned and have given "full freedom" to the party to reshuffle the ministry.

"All ministers from #JDS have submitted their resignations just like the 21 ministers from #Congress. Cabinet reshuffle will happen soon, the Chief Minister's Office said in a tweet.

Under the coalition arrangement, out of the total 34 ministerial positions, Congress and JD(S) have shared 22 and 12 berths respectively.

Prior to the eventual resignation of Shankar, who recently became a Minister under Congress quota, Siddaramiah said he too offered to quit, but they had not taken it.

Congress had filled in all its berths while there are two vacancies under JD(S) share after Nagesh's resignation Monday as he was made minister under the regional party's quota.

Siddaramaiah said the reshuffle will be done based on eligibility, social justice and regional balance.

In a message to the disgruntled MLAs, he said: "I want to tell them don't fall prey to BJPs allurements, we will listen to you and sort out your issues, don't take a hasty decision. This is my request to them on behalf of the party," he said, adding efforts were on to pacify them.

He said the cabinet reshuffle will happen as soon as possible after discussion with party high-command.

Responding to the political developments, Kumaraswamy asserted he had "no fear" about the happenings and was concentrating on fulfilling his responsibilities.

The JDS leader evaded a direct answer to a question about the resignation of 13 MLAs and merely said: "Let's see".

In Mumbai, the Maharashtra BJP claimed it was not aware of the presence of the dissident Congress-JDS MLAs from Karnataka even as a saffron party leader was spotted at the hotel where the legislators are put up.

Maharashtra BJP legislator Prasad Lad was seen at the hotel on Sunday and Monday. He did not speak to the media.

In Parliament, Congress leader Adhir Ranjan Chowdhury alleged the Modi government was hatching a conspiracy to break the Congress-led government in Karnataka and Madhya Pradesh.

"This government is secretly hatching a conspiracy against the state government. They took our MLAs to a five-star hotel in Mumbai," Chowdhury said during Zero Hour.

However, Singh denied any role by the party-led government, saying "whatever is happening currently in Karnataka, we have no relation with that."