Chief Minister B S Yediyurappa, who is set to seek the trust vote in the assembly, struck a confident note, saying 'On Monday hundred per cent I will prove the majority.' 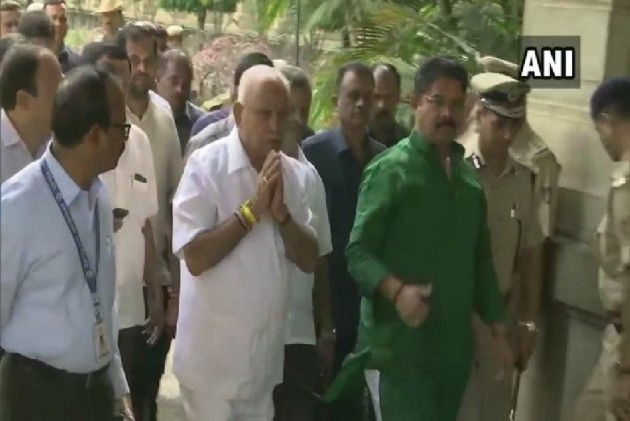 Karnataka Assembly Speaker K R Ramesh Kumar on Sunday disqualified 14 more rebel MLAs under the anti-defection law, an action that reduces the majority mark in the assembly and paves the way for the newly formed BJP government to win the trust vote smoothly on Monday.

Eleven Congress MLAs and three JDS lawmakers faced the axe from the speaker in addition to the three disqualified earlier, bringing down the majority mark to 104, one less than the current strength of 105 of the BJP, which also enjoys the support of an Independent.

Chief Minister B S Yediyurappa, who is set to seek the trust vote in the assembly, struck a confident note, saying "On Monday hundred per cent I will prove the majority."

Kumar pronounced his ruling at a hurriedly called news conference on the eve of the trust vote, two days after Yediyurappa took the oath as chief minister but the rebels said they would challenge it in the Supreme Court.

Karnataka's ruling Bharatiya Janata Party (BJP) on Sunday night issued a whip to all its 105 legislators to attend the Assembly on Monday from 11 a.m. when the trust vote will be moved by Chief Minister B.S. Yediyurappa for proving majority.

Here are the Live updates:

11:40 AM: HD Kumaraswamy said, "Power is not permanent, even for Narendra Modi and JP Nadda. We will not try to bring down your number from 105 to either 100 or lower. You speak of drought, at least now let's see how you will work. We will cooperate with you for the sake of people."

11:35 AM: H D Kumaraswamy said, "I ran govt for 14 months. I have no obligation to answer your (BS Yediyurappa) questions. I need to answer to my conscience. From the past 14 months, everything was being recorded. People know what work I have done."

"We hope you (BS Yediyurappa) will be chief minister but there is no guarantee of that. You are with the rebels, can you give a stable government? It's impossible! I oppose this confidence motion because the reason is this government is unconstitutional and immoral", he added.

11:20 AM: Siddaramaiah added, "We're elected to work for people and we must try to do that. I attempted this as CM and so did HD Kumaraswamy. Yediyurappa said administration has come to stand still and he wants to rectify that. It wasn't the case. In coalition, we worked towards bringing to force common minimum program."

11:18 AM:  Congress leader Siddaramaiah said,  "We discussed HD Kumaraswamy's confidence motion over 4 days. I too participated in that and I don't wish to speak about it. I could've spoken about circumstances under which Yediyurappa became CM. I wish him well and welcome his assurance that he'll work for people."

11:10 AM: Chief Minister BS Yediyurappa moves confidence motion, He says "When Siddaramaiah HD Kumaraswamy were CMs, they didn't indulge in vindictive politics. The administration has failed and we'll set it right.

11:05 AM: Assembly proceedings at Vidhana Soudha in Bengaluru begins.

10:05 AM: The newly sworn-in Chief Minister BS Yediyurappa arrives at Vidhana Soudha in Bengaluru. He will face a trust vote today.