Highlights: After 14 Months In Power, Kumaraswamy Govt Falls In Karnataka

Karnataka chief minister H D Kumaraswamy lost the confidence motion in the Assembly with 99 votes caste in its favour and 105 against it. 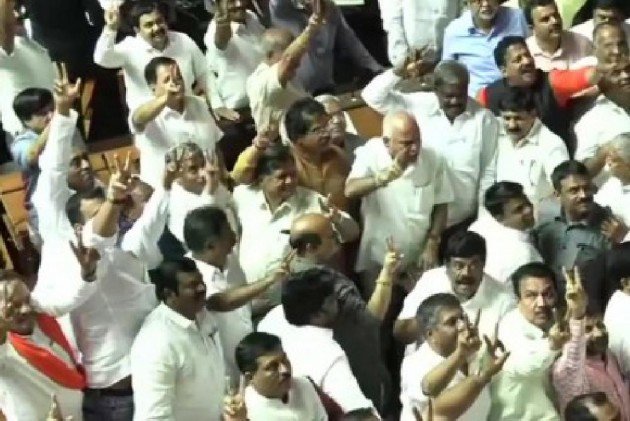 The debate on the confidence motion in the Karnataka Assembly ended on its fourth day with Speaker KR Ramesh Kumar announcing that the Congress-JD(S) coalition government, led by H D Kumaraswamy, lost the floor test in the Assembly on Tuesday.

Here are the Highlights:

He added, "The coalition government in Karnataka was brought down by the nefarious joint efforts of the Central Government, Governor, State Government of Maharashtra and Central BJP leadership."

8:42 PM: Siddaramaiah said, "15-16 of our MLAs violated the whip by abstaining from the House during the trust vote, thereby, it is a clear violation of Schedule 10 (of the Constitution) and attracts disqualification."

8:07 PM: BJP's Jagadish Shettar, "Their (rebel MLAs) resignations have not yet been accepted by Speaker, after acceptance of resignations they have to decide whether to join BJP or not. In present scenario we have 105 MLAs, it is a majority for BJP, we will form a stable government."

8:05 PM: State BJP chief BS Yeddyurappa said, "We assure the farmers that we will give more importance to them in the coming days. We will take an appropriate decision at the soonest."

BS Yeddyurappa, BJP: It is victory of democracy. People were fed up with Kumaraswamy government. I want to assure people of Karnataka that a new era of development will start now. pic.twitter.com/JmVrtTa9SK

8:00 PM: The 14-month-old JD(S)-Congress coalition government in Karnataka lost the floor test by six votes as 99 legislators were in favour of the confidence motion and 105 against it, Assembly Speaker K.R. Ramesh Kumar announced before adjourning the House.

It’s the victory of people of Karnataka.

It’s the end of an era of corrupt & unholy alliance.

We promise a stable & able governance to the people of Karnataka.

7:46 PM: BJP Karnataka tweeted within the moments of fall of the r Kumaraswamy government.

6:01 PM: Karnataka CM H D Kumaraswamy said, "I had no intention to drag the trust vote; I apologise to Speaker and people of the state". He added that he had plans to quit politics when assembly poll results for 2018 were declared.

Bengaluru Police Commissioner Alok Kumar said, "Today and tomorrow we are imposing Section 144 across the city. All pubs, wine shops will be closed till 25th. If anyone is found violating these rules, they will be punished."

5:40 PM: Congress workers protest outside an apartment on Race Course Road in Bengaluru alleging that independent MLAs have been lodged there.

#WATCH Karnataka: Congress workers protest outside an apartment on Race Course road in Bengaluru alleging that independent MLAs have been lodged here. pic.twitter.com/sNyTnr6bZR

5:30 PM: Siddaramaiah said,  "Rs 25 crore, 30 crore, 50 crore, where is this money coming from? They(rebel MLAs) will be disqualified. Their political 'samadhi' will be built. Whoever defected since 2013 lost. The same fate awaits those who have resigned this time. It should happen."

12:29 AM: SC adjourns hearing plea by rebel Karnataka MLAs and notes submissions on behalf of Karnataka Speaker that trust vote is likely to complete by this evening.

12:09 AM: SC commences hearing on the plea of 2 independent MLAs seeking forthwith voting on trust motion in Karnataka assembly.

10:35 AM: Former Karnataka chief minister and BJP leader J Shettar on Monday told ANI that it's the final day for the Congress-JD(S) coalition government in the state. "We believed yesterday was the last, but because of the 'milapi kushti' between the ruling party and others, they postponed it for a day... We'll see what happens," he said.

10:28 AM: BJP MP Shobha Karandlaje said the Congress-JD(S) coalition doesn't have the required numbers. "They're a minority govt. MLAs are in Mumbai. They don't want to come. Let's see what happens by this evening. Confident that this government will definitely go," she was quoted as saying by ANI.

7:50 AM: Meanwhile, the Supreme Court will on Tuesday hear a plea moved by two independent Karnataka MLAs seeking a direction to the government to "forthwith" hold a floor test.

7:45 AM: "I do not want this 11 pm thing again. Everyone has health conditions," the Speaker said on Monday night.