The 14 MLAs, at the centre of the crisis in the JD(S)-Congress government, had been staying in a luxury hotel in Mumbai and left on Monday evening for Goa. 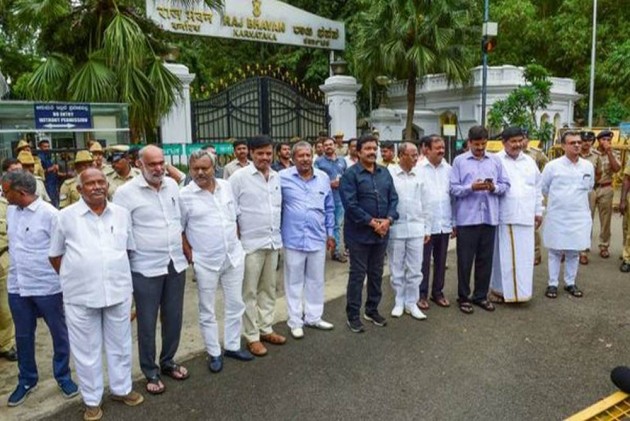 Fourteen MLAs of Karnataka's ruling coalition are in a place about 90 km from Pune, and will wait for the Speaker's decision on their resignations before taking a call on proceeding to Goa or returning to Bengaluru, sources said on Tuesday.

The 14 MLAs, at the centre of the crisis in the JD(S)-Congress government, had been staying in a luxury hotel in Mumbai and left on Monday evening for Goa.

But they are presently stationed at a location 90 km from Pune, towards Satara, in Maharashtra, the sources said.

If their resignations are accepted, they may even go back to Bengaluru, they added.

The MLAs -- 10 of the Congress, two of the JD (S) and two Independents -- were to travel to Goa by road, accompanied by Mumbai BJP Yuva Morcha president Mohit Bhartiya, they said.

"The decision on whether to go to Goa will be taken at 3 pm after the Karnataka Assembly Speaker (Ramesh Kumar) takes a call on the resignations of these MLAs. If he accepts the resignations, the MLAs may even go back to Bengaluru," a source said.

Seven more MLAs of the ruling combine from Karnataka are likely to join the 14 legislators later in the day, the source said.

The monsoon session of the Karnataka legislature will begin on July 12.

Maharashtra BJP legislator Prasad Lad had earlier said the 14 MLAs left the luxury hotel in Mumbai, where they were staying at 5 pm on Monday.

They were expected to stay at a resort in Goa where arrangements were made for them, the sources said.

The year-old Congress-Janata Dal (S) coalition government in Karnataka is on the brink of collapse after the spate of resignations by the MLAs.

The Karnataka Assembly has 225 members, including one nominated MLA. The halfway mark in the 225-member Assembly is 113.

The Congress-JD(S) coalition effectively had the support of 119 MLAs in an Assembly.