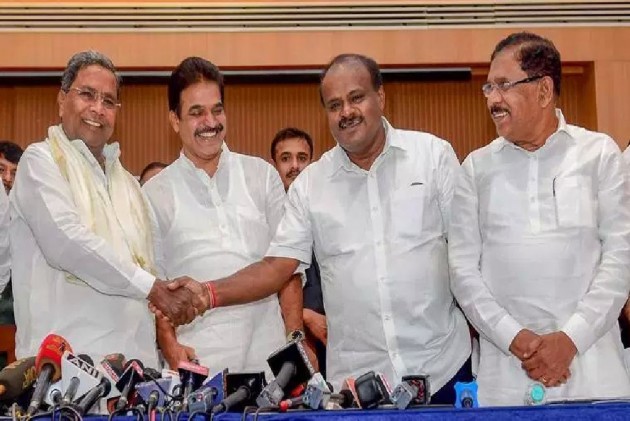 A month after the collapse of the H D Kumaraswamy-led coalition government in Karnataka, a political slugfest has erupted between JD(S) patriarch H D Deve Gowda and Congress Legislature Party Leader Siddaramaiah with each holding the other responsible for it.

The political war gained momentum on Friday with Siddaramaiah launching a tirade against his one time political mentor Gowda, who has been making allegations holding him responsible for the previous Congress-JDS coalition governments collapse.

Dismissing the charges as "baseless" and "politically motivated", Siddaramaiah said Gowda was hurling such charges out of "political hatred" and to project him as "anti-Vokkaliga" with an intention to weaken the Congress in old Mysuru region.

Holding Gowda and his sons Kumaraswamy and H D Revanna (former Minister) squarely responsible for the coalition government's fall last month, the Congress leader challenged them to show at least one instance of his "interference" in governance.

"Deve Gowda has made some allegations against me, they are all baseless, politically motivated and false," Siddaramaiah told reporters.

Gowda in the last couple of days has repeatedly blamed Siddaramaiah for the fall of the coalition government.

On Thursday, he had said the Congress high command decided to make Kumaraswamy the chief minister without consulting Siddaramaiah and the latter could not digest it.

Seeking to turn the tables, Siddaramaiah, who was the coordination committee head of the coalition, said it was the 'unilateral' style of administration that led to the government's collapse, adding Congress had made all attempts to save the ministry till the last minute.

"I did not want the BJP to come to power, so when Congress leaders from Delhi said the high command has decided that despite having 80 MLAs we should support JD(S) with 37 MLAs.

I accepted it without opposing it and gave full cooperation for 14 months," he said.

On the other hand, the "truth is" Kumaraswamy, Revanna and Deve Gowda were responsible, he said claiming that unilateral decisions and not taking MLAs and Ministers into confidence were the primary reasons that led to dissonance.

Continuing his attack on the Congress, Gowda on Friday said Kumaraswamy had shed tears wanting to resign as Chief Minister citing "trouble" from the alliance partner in running the administration.

Stating that he was "swallowing pain" all these days, he said, he had advised Kumaraswamy against resignation in the larger interest of the unity of secular parties.

Meanwhile, Kumaraswamy said this was not the time to react to Siddaramaiah's allegations and he would respond at the right time.

"This is not the time to respond to allegations made by former Chief Minister Siddaramaiah. At the time when secular forces have to unite, talks that may cause split is not healthy. At an appropriate time I will certainly respond to everything," Kumaraswamy tweeted.

The coalition government collapsed on July 22 after the confidence motion moved by Kumaraswamy was defeated in the Assembly, bringing to an end his 14-month long turbulent tenure.

Both parties have not been committal on the continuation of the alliance after the governments collapse.

Asked about it, Siddaramaiah maintained that it was left for the high command to decide and he will convey his opinion to them.

Accusing Gowda and JD(S) of making false allegations due to political motives and to cover up their own 'mistakes', Siddaramaiah said none of the decisions taken in the coordination committee were implemented.

He mocked at Gowda for his reported remarks that his (Siddaramaiah's) aim was to become the Leader of Opposition by ensuring fall of the coalition government, saying he had never seen any one pulling down a government to become LoP.

Siddaramaiah said he was never involved in "silly politics" of pulling down a government, while it was in "nature by birth" for Gowda and his sons and held them responsible for the BJP coming to power in the state.

Siddaramaiah, a protege-turned-rival of Gowda was expelled from JD(S) in 2005 as he tried to emerge as the leader of 'Ahinda' (Kannada acronym for minorities, backward classes and Dalits).

The Congress leader also said he had suggested that the Congress and JDS contest the Lok Sabha polls without an alliance having friendly fights as both were arch-rivals in old Mysuru region.

"Ultimately we agreed for the alliance following the high command decision," he said, adding Gowda was now blaming him for his defeat and that of his grandson Nikhil Kumaraswamy in Tumkur and Mandya seats respectively.

"For them only their family's growth is important. They never allowed anyone to grow in politics, not even from their own community," he claimed.

Gowda projected those who opposed him or his family as anti-Vokkaliga, the congress leader alleged.

He also alleged that Gowda and Kumaraswamy were responsible for him missing out from becoming Chief Minister in 1996 and 2004.

"Kumaraswamy has accepted this in the assembly on record," Siddaramaiah claimed.

The Congress and JD(S) had bitterly fought against each other during the 2018 assembly polls but joined hands after the elections threw up a hung verdict to keep BJP, the single largest party in the 225-member House, out of power.

Defending Siddaramaiah, state Congress chief Dinesh Gundu Rao said there are always issues in coalition governments, but there was nothing to shed tears as being claimed.

Stating that such statements won't benefit anyone, he said "we had extended complete cooperation to Kumaraswamy till the last moment.