The Congress' march from Mekedatu to Bengaluru is scheduled to pass through Kanakapura, Ramanagara and Bidadi, before culminating at Basavanagudi in Bengaluru on January 19. It will be covering about 15 of the 224 Assembly constituencies in the state. 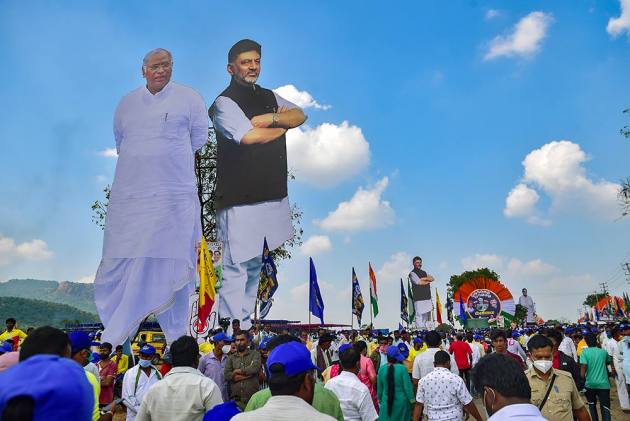 The High Court  directed  the Karnataka Pradesh Congress Committee (KPCC) to submit before it by January 14 their proof of  taking any permission to hold the 'Walk for Water' demanding a balancing reservoir across Cauvery river at Mekedatu in Ramanagara district.

Hearing a petition, the division bench comprising Chief Justice Ritu Raj Awasthi and Justice Suraj Govindaraj also directed the state government to submit before it on Friday how the permission was granted to the KPCC to hold the rally.

The Bench asked the state government what measures were taken to restrain the KPCC from holding the rally. The court directed the Congress to explain whether they were adhering to COVID-19 norms such as wearing face masks and maintaining social distancing. The petition was filed by A V Nagendra Prasad through advocate Shridhar Prabhu.

Following a surge in COVID-19 cases in the state, the Karnataka government had on January 4 banned protests, demonstrations and congregation of people.Yet, the Congress went ahead with its 'padayatra' (march) saying that the government was inflating the number of coronavirus cases, and alleging that it's trying to scuttle the party's programme.

"The CM and I have noticed the observations made by the High Court on this issue. We have asked the Advocate General for details of the observations made by the court. We will study it and take a decision accordingly," Karnataka Home Minister Araga Jnanendra told reporters.
To a query on the measures taken, Jnanendra said many First Information Reports (FIRs) have been filed against those leading the padayatra.

The minister said the High Court has given the government a day's time during which the matter will be discussed and a decision taken accordingly. He was hopeful that the Congress, which was in power earlier and is the principal opposition party, will stop their march after receiving a "direction" from the Karnataka High Court.

"The High Court has served a notice to the Congress party, which is a responsible opposition party, asking them whom did they seek permission from and why did they choose this time for their agitation. Hence, I feel that they will stop it (march)," Jnanendra said.

Replying to a query on why the government did not stop the march at the beginning itself, the minister said, "Your statement that this march should have been stopped is also the opinion of people. There is public anger against the padayatra. We had given them warning also. Against the background, we will take action."

The Congress started its 10-day padayatra demanding implementation of the Mekedatu project across Cauvery river, despite COVID-19 restrictions, on January 9.

Led by Congress' state president D K Shivakumar and Leader of Opposition in the State Assembly Siddaramaiah, the padayatra with the theme 'Namma Neeru Namma Hakku' (Our water, Our right) began at the Sangama, the confluence of Cauvery and Arkavathi rivers at Kanakapura in Ramanagara district, and will be spanning a distance of nearly 139 km.

Chief Minister Basavaraj Bommai has accused the Congress party of playing politics on the Mekedatu issue, instead of behaving like a responsible opposition. Further, alleging that the Congress did not put any efforts to take the project forward while in power, he reiterated that his government is committed to implement the project.

Though the padayatra is being projected as apolitical by demanding the implementation of the Mekedatu project, it is also seen as Congress' attempt to mobilise its cadres and consolidate its voter base in the old Mysuru region, which is a Vokkaliga bastion, where JD(S) is its traditional rival and the ruling BJP is attempting to make inroads ahead of the 2023 Assembly polls.

Much is at stake for Shivakumar, the man behind this march, as several Congress functionaries believe that it is an attempt by the KPCC chief, ahead of the state elections, to assert his chief ministerial ambitions, for which Siddaramaiah is also a strong contender. The party has seen several incidents of political one-upmanship between the two leaders last year.

The Karnataka government submitted a Detailed Project Report (DPR) to the Central Water Commission (CWC) in 2019, which was then referred to the Cauvery Water Management Authority (CWMA) where it is stuck currently as Tamil Nadu, which is the lower riparian state has opposed the project tooth and nail.

Karnataka has maintained that the project within its territory will benefit both states as the surplus water stored can be managed between the two during the distress years, and its implementation will in no way affect the interests of Tamil Nadu's farming communities, as there will be no impact on its share of water.

While the neighbouring state is of the view that the project would "impound and divert" the uncontrolled water flow due to Tamil Nadu from Kabini sub-basin, the catchment area below Krishnarajasagara, and also from Shimsha, Arkavathi and Suvarnavathi sub-basins besides other small streams.

The estimated Rs 9,000 crore Mekedatu multipurpose (drinking and power) project involves building a balancing reservoir near Kanakapura in Ramanagara district. The project once completed is aimed at ensuring drinking water to Bengaluru and neighbouring areas (4.75 TMC) and can also generate 400 megawatts of power.