The People’s Union for Civil Liberties (PUCL) questions the rationale behind the Karnataka government’s proposal for tabling the anti-conversion bill in the ongoing winter session. 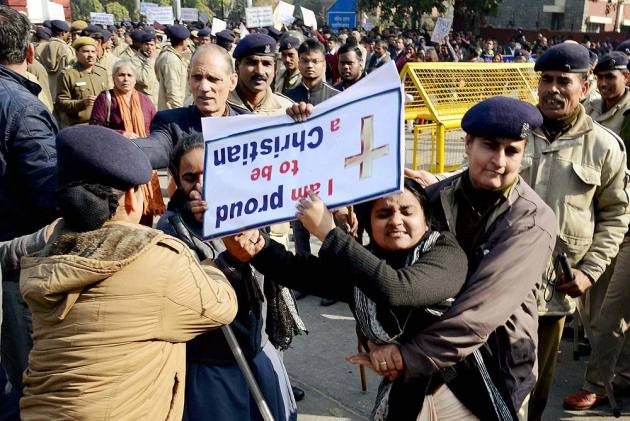 As the BJP-led Karnataka government mulls introducing an anti-conversion law, the People’s Union for Civil Liberties (PUCL), a human rights organisation, has accused the state police of complicity with Hindutva groups involved in alleged incidents of hate crimes against Christians.

The organisation released “Criminalising the Practice of Faith: A report by PUCL Karnataka on the Hate Crimes on Christians in Karnataka, 2021” on Tuesday in Bengaluru. The report also questioned the rationale behind the state government’s proposal for tabling the anti-conversion bill in the ongoing winter session. “Such a bill is likely to only make matters worse for the Christian community by giving carte blanche for excesses by vigilantes,” the report said.

The PUCL has accused police of turning “a blind eye to incidents of violence, abuse, sexual assaults, economic and social boycott” against Christians.

The report identified 39 incidents of hate crimes — between January and November this year—allegedly committed by Hindutva groups over suspicion of conversions. “In almost all instances, prayer meetings were disrupted or violently attacked. A common pattern is that the language used in the verbal abuse primarily consisted of casteist slurs. These slurs must be seen in the context that Christians in rural India largely comprise of daily wage workers, agricultural labourers and people from Dalit communities,” the report reads.

Maintaining that police arrested pastors and believers in many cases of targetted mob violence, the report said, “They even issued formal notices to churches to stop prayer meetings. This failure of the State further marginalises a minority community in how they live their lives struggling to access education, shelter, food, livelihood and basic dignity during Covid.”

The report has also published testimonies of pastors who have survived mob attacks. Citing one such instance, Pastor Sanket has recalled an attack on a church in Hubbali on October 17, 2021, “When we started the prayer meeting, there were already some people wearing saffron scarves sitting inside the church…They started beating up the believers and some of them started assaulting me. After the believers and I were dragged to the police station, a bigger mob of about 100 people gathered. They kept some of us in the police station and lodged an FIR against us…we were kept in jail for 11 days.”

In some cases, instead of taking action against the perpetrators of the violence, the report said, “Police follow a conciliatory approach and attempt to arrange a compromise between the Christians and the Hindutva groups. They do this by convincing the victims that filing complaints or pressing charges will bring them more trouble and inconvenience and that they are better off if they do not go to court.”

The report has pointed out the discrimination and social boycott that Christians have been facing even from persons who are not a part of accused Hindutva organisations, such as their own neighbours, landowners, employers, small businesses like grocery stores, even schools, in their localities. “The psychological impact of such a vast range of hate crimes carried out by neighbours, police officials and Hindutva leaders have severely affected their livelihoods, food security and general well-being,” the report claimed.

Asking for strict implementation of Supreme Court directives to tackle incidents of mob violence and lynching, the PUCL has stressed on the state government to ensure that FIRs are registered without delay to prevent harassment of family members of the victims. It also demanded that cases of mob violence be tried by fast-track courts on a day-to-day basis and errant police officials held accountable.

The PUCL also described the state Directorate of Minorities’ survey of churches as “unconstitutional”. On October 25, the Karnataka High Court issued notice to the state government in response to a plea filed by the organisation. The court, however, has not stayed the contentious survey.

Debunking claims that the Christian population was on the rise in Karnataka, the PUCL report quoted census figures to show that population of Christians in 1971 was 2.09 per cent whereas it had declined to 1.87 per cent as per the 2011 census.

Questioning the government’s proposal for anti-conversion law, the report asked, “Why is the State thinking of bringing an anti-conversion bill when the current Freedom of Religion Acts have very few people who are convicted under them? Why is the State interfering in an individual’s faith against the mandate of the Constitution?”

“The point this report seeks to make is that the myth of conversion remains a bogey which is used to target the constitutional right to practice, profess and propagate religion as recognised under Article 25,” the report stated, adding “In today’s Karnataka, using the language of ‘conversion’, Christians’ constitutional right to practice and profess their religion is being curtailed.”