Karnataka Assembly does not meet the 1.30 PM deadline set by Governor for Chief Minister H D Kumaraswamy to prove his majority. 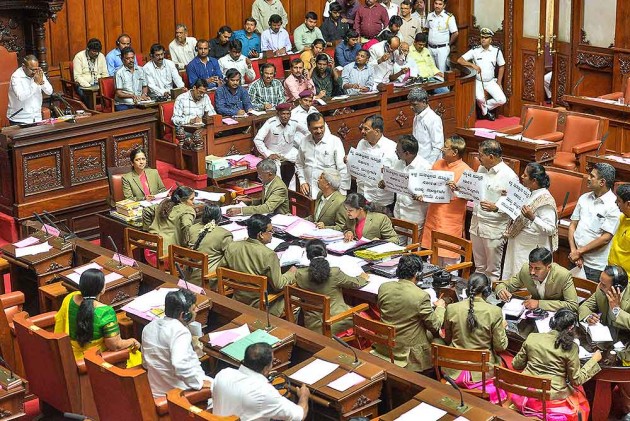 Karnataka Chief Minister H D Kumaraswamy has failed to meet the 1:30 PM deadline set by Governor Vajubhai Vala to prove his majority in the state Assembly.

Even as the deadline neared, the ruling coalition questioned the Governor's power to issue such a direction, with Kumaraswamy citing a Supreme Court verdict that a Governor cannot act as ombudsman of Legislature.

Kumaraswamy said he would not criticise the Governor and requested the Speaker K R Ramesh Kumar to decide whether the Governor can set a deadline.

As the treasury bench objected to the Governor's direction, Congress members shouted slogans, "Go back Governor."

When the deadline ended, BJP leader B S Yeddyurappa stood up and pressed for division on the vote of confidence moved by the Chief Minister.

The Speaker said there was a process to be followed and the motion would be put to vote, if pressed for, according to rules after discussion.

Amid bedlam, the House was then adjourned till 3 p.m.

Vala on Thursday directed Kumaraswamy to prove his majority on Friday by 1:30 PM.

"I require you to prove your majority on the floor of the House on or before 1:30 PM tomorrow (Friday)," said Vala in a letter to the Chief Minister within hours after Speaker K.R. Ramesh Kumar adjourned the Assembly.

The Governor had also brought to the chief minister's attention that he had already directed the Speaker to hold the floor test by the end of Thursday under Article 175(2) of the Constitution.

"But I am informed that the House is adjourned today (Thursday). Under these circumstances, I require you to prove majority on Friday by 1:30 p.m.," the letter reiterated.

The Governor's direction to the Chief Minister and the Speaker earlier was in response to a written representation to him by a delegation of Bharatiya Janata Party (BJP) legislators that the House proceedings for vote of confidence have been stalled and consequently adjourned without reaching any finality.

"This cannot go on in a democratic set-up governed by the Constitution," Vala said in the letter.

Noting that of the 117 members of the ruling Janata Dal (Secular) and Congress allies, if 15 of them were to move away, Vala said their action would cast a serious doubt on the confidence in the government led by Kumaraswamy.