Crowds at Congress leader Ghulam Nabi Azad's recent rallies show that he will be a key player in elections in Jammu and Kashmir, when they happen. 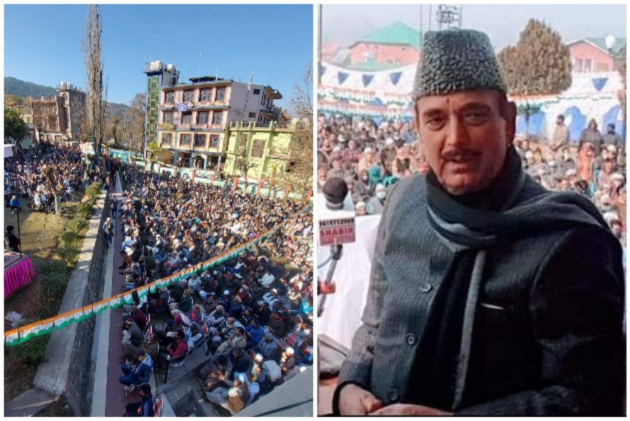 In rally after rally in Muslim majority districts of Pir Panchal and Chenab Valley, former Chief Minister Ghulam Nabi Azad is making his presence felt. Incidentally, state Congress president, Ghulam Ahmad Mir was not seen present in any of the former's rallies.

A large number of senior Congress leaders have already resigned from different positions they were holding in the state Congress as they are openly asking Congress’s central leadership to appoint Azad as the PCC chief in place of present incumbent Ghulam Ahmad Mir.

Mir is holding the position of J&K Congress president for the past seven years. Those who resigned from various Congress positions are considered as loyalists of Azad, though they say they have taken the decision independently. Their argument is that with Mir at the helm, Congress has shrunk in Jammu and Kashmir and only Azad can transform it into a force in J&K and could bring it into power.

Irrespective of his party’s approach, Azad is holding rallies at a large scale calling for immediate restoration of J&K's statehood.

"If you wanted to bring any change in J&K, it should be done by the Assembly of J&K, not by the parliament. Our fight with the present government since the abrogation of Article 370 and dismembering of Jammu and Kashmir State is that it didn’t seek the consent of J&K Assembly for bringing these constitutional changes,” Azad said addressing people in the Surankote area of Poonch on Thursday.

The Congress leader also stressed that the constitutional changes brought on August 5, 2019, through the parliament and through Governor’s rule were legally and politically wrong. “Only the people of J&K and the J&K Assembly have the right to bring such changes. Only J&K Assembly has the right to make amendments to Article 370,” Azad said. Responding to the criticism of former Chief Minister Omar Abdullah about his silence over Article 370, Azad said, “for the past three years I alone am talking about Article 370 in the parliament. No one else is talking about it there.”

However, Azad reiterates that the matter of Article 370 is now in Court. “I don’t talk about Article 370 because it is in the Supreme Court. The present government cannot restore Article 370 as it has abrogated it. And we don’t have 300 parliament members to restore it and there seems no possibility for Congress to have 300 seats by 2024,” he said. Nevertheless, Azad stressed the restoration of statehood since both the Prime Minister and the Home Minister had promised it. He said early this year the Prime Minister convened an All Parties Meeting where Azad was the first to speak. "I said that restoration of statehood should be followed by delimitation and elections. And I also sought guarantees about the land and recruitment,” Azad said.

Azad has been pushing for the addition of clauses on protection of land and recruitment in government jobs to the state government and the state legislator once it brings a bill to restore statehood to J&K.

Political analyst Zafar Choudhary feels that Azad holding big rallies is an aberration in itself in contrast to his traditional style of holding small corner meetings.

Choudhary however, says that so far Azad’s big rallies all across Jammu and Kashmir have remained under the Congress banner and flag. “Such shows could likely be aimed at reaching out to people while at the same time compel Congress to hand over J&K to Azad or work out a middle path. If Congress doesn’t listen, one cannot rule out Azad coming up with another party in J&K," Chaudhary says.

The analyst, however, feels that irrespective of what happens, Ghulam Nabi Azad has emerged as a key player in the politics of Jammu and Kashmir whether. Whether he is working under the congress banner or not, Azad will be a key player in J&K polls when they happen,” Choudhary says.

But at the same time, Azad has emerged as one of the biggest critics of the present dispensation in Jammu and Kashmir, taking up issues of alleged fake encounters and dismissing of government employees among other things. “Not only had the J&K administration stopped giving employment, but was now focusing on expelling people from their jobs. It seems that this Government’s work is not to give jobs, but to expel people from jobs,” he says. Azad is also banking upon developmental works he carried out in Jammu and Kashmir during his tenure to woo potential voters.

In the coming weeks, much will be dependent upon Congress’s decision about Mir and how Azad’s personal politics plays out in J&K.