The protesting journalists said the new policy would cripple journalism in Kashmir, and that it makes the government the editor, printer, and publisher of newspapers in the valley. 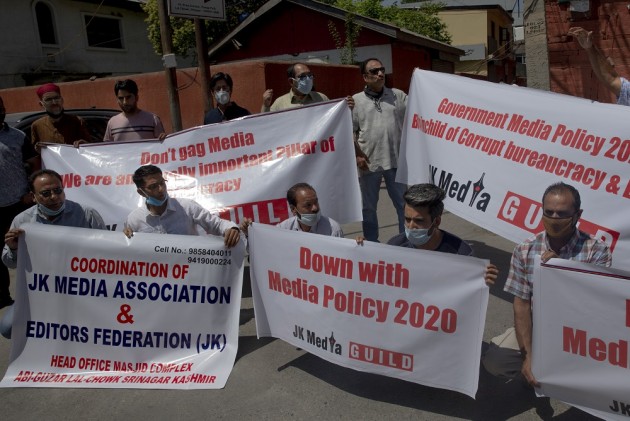 A group of Kashmiri journalists on Monday staged a protest in Srinagar against the new media policy of the Jammu and Kashmir administration and demanded its immediate rollback. They said the new policy would cripple journalism in the Valley, and that it makes the government the editor, printer, and publisher of newspapers in the Union Territory.

“Under the policy, before publishing any story, we have to report to the government to take their permission,” said Rashid Rahi, President, J&K Editors Association. He questioned the need for the government to come up with a separate media policy for Jammu and Kashmir. “It is a threat to journalism in Kashmir. Before circulating news, you have to seek permission and that speaks volumes about the policy,” he said, seeking rollback of the policy.

The protesting journalists, who assembled at Kashmir press enclave at Lal Chowk, were seen carrying banners that read “Don’t Gag Media” and “Down with Media Policy 2020”.

“Under the policy, if you fail to get consent from the concerned officials to publish news reports or articles, your newspaper registration can be cancelled, FIR can be filed, or government advertisements can be barred. It makes government the editor, publisher and printer of the newspaper,” Rahi said.

The media policy formed by the government last month gives it power to examine the content of print, electronic and other media for “fake news, plagiarism and unethical or anti-national activities.” “Any individual or group indulging in fake news, unethical or anti national activities or in plagiarism shall be de-empaneled besides being proceeded against under law,” the policy reads. The government has not defined what is deems as “anti-national”. Similarly, there is no explanation about what is ethical. The government has also left “fake news and plagiarism” undefined.

The policy document says that J&K has significant law and order and security considerations. “It has been fighting a proxy war supported and abetted from across the border. In such a situation, it is extremely important that the efforts of anti-social and anti-national elements to disturb the peace are thwarted. In order to ensure it, it shall be made incumbent that before empanelment of newspapers, news portals for release of advertisements by the government, the antecedents of the paper, news portal as well that of its publisher/editors/key personnel are duly gone into,” the media policy reads.

It also says that while giving accreditations, a robust background check including verification of antecedents of each journalist would be carried out with the assistance of the relevant authorities. “For this purpose, the guidelines for accreditation shall be revised and updated to reflect this requirement.”