Recent killings in the Valley have struck fear in the hearts of Pandit employees posted there. 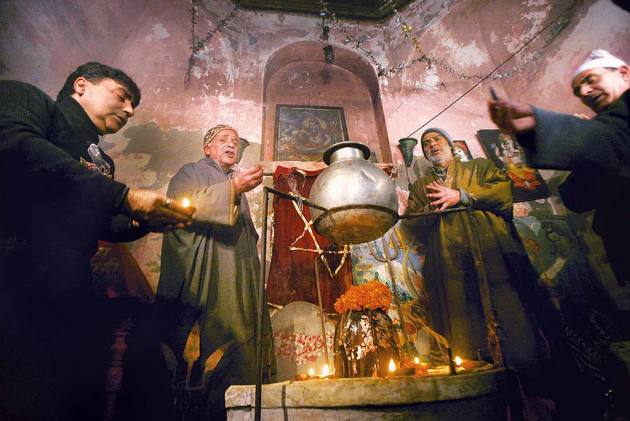 Fear has gripped government employees from the Kashmiri Pandit community working in Kashmir.

Following the recent killings in the Valley, especially of two government teachers, Pandit employees have started returning to Jammu. Some have already returned, while many more are expected to do so in the next few days.

Fearing for their safety in the Valley, some have decided against going back to the Valley even if they have to resign.

Rajesh (name changed), who didn’t even want to be identified by his surname, says he couldn’t stop his tears after hearing of teachers being killed and immediately decided to return to Jammu.

Along with some other employees, he travelled the whole night and reached Jammu early morning on Friday (October 8).

“Everything was normal before this incident,” says Rajesh.

“I was in my school when my colleagues told me about the killing of teachers. I started crying, fearing I could be next. It’s impossible for us to work in the Valley. The government should do something to continue our employment or I will resign.”

About 300 Pandits left the Valley on Thursday evening and headed for Jammu. Rajesh says many more would be leaving soon as staying in Kashmir has become too risky.

Rajesh was selected as a teacher four years ago under the prime minister’s special employment scheme for Kashmiri Pandits. Six thousand Pandit youth were to be given government jobs under the scheme, and 4,000 have been recruited so far. The Pandits appointed under this scheme can be posted only in the Valley and can’t opt to be transferred out.

They say security was not really a problem before the recent killings as Pandits were not being targeted despite the unrest in Kashmir.

Rajesh says it is wrong to paint the entire Kashmiri Muslim community with the same brush. Not a single Hindu lived in the vicinity of the school where he worked, but he had never felt unsafe or out of place.

“We were living comfortably here and, in fact, feeling more secure than in Jammu,” says Rajesh.

“My Muslim colleagues used to say that we shouldn’t have left the Valley in the first place (in the 1990s) as the Pandits who stayed back were never harmed. This even made me question the reasons for the migration of Pandits from the Valley.” Then, on September 5, a pharmacist named Bindroo was shot dead in his shop in Srinagar. “He was a well-known figure and his killing scared me,” says Rajesh.

Navneet (name changed), another Pandit employed as a teacher under the scheme—and who also wished not to be identified—says something was brewing for about 15 days, but people like him were not taking it seriously.

He says his Kashmiri Muslim colleagues told him to be more alert and avoid anything that could give away his religious identity—such as pictures of Hindu deities in his vehicle. Many believe locals do tend to sense what’s coming as they have seen how militancy has panned out in the Valley.

“When the news of teachers being killed reached our school, my female Muslim colleagues escorted me out of there,” says Rajesh.

“On the way to my room, they asked me to sit in the middle of the backseat of the vehicle, so nobody could see me. Another Muslim colleague was driving. They also constantly called me to enquire about my safety until I reached Jammu.”

In Navneet’s case too, it was his Muslim colleagues who ensured his safety while returning to his room in Srinagar and made arrangements for his return to Jammu.

Former J&K chief minister Omar Abdullah says senior officials had informed him of a strong possibility that Pandits could be targeted. “If I was getting information, then what was the administration doing? They should have acted on it,” he says.

Former J&K minister and Peoples Conference chairman Sajad Lone says nothing happens all of a sudden in Kashmir. “There are always tell-tale signs that the government should have read,” he says.

Rajesh recalls that a few days ago a Pandit colleague had told him about police asking Pandit employees staying at a colony made for them in Anantnag to not step out unless necessary.

This, coupled with Bindroo’s killing, made Rajesh and other Pandits employees uneasy and fear started creeping in. In Baramulla, a camp housing 145 Pandit families has been sealed. Tight security arrangements have been made in Sheikhpora, where about 300 such families are living.

Navneet and Rajesh are firm about not returning back to the Valley. As they put it, returning would be like putting themselves before the gun. “No one would do it. We would rather resign than work under constant threat to our lives.”