Three Get Life Imprisonment In Kathua Rape And Murder Case

A special court in Pathankot sentenced three of the convicted men to life imprisonment, while three others have been sentenced to five years for destruction of evidence 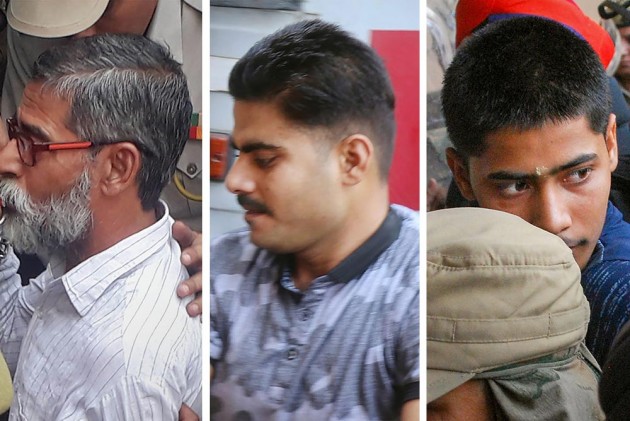 Sanji Ram, Deepak Khajuria and Parvesh Kumar, the three main accused in the gangrape-and-murder of an eight-year-old nomad girl from Kathua, were on Monday sentenced to life imprisonment by a court in Pathankot.

Ram, the caretaker of the temple where the crime took place, Special Police Office Khajuria and Kumar, a civilian, have been convicted under Ranbir Penal Code sections pertaining to criminal conspiracy, murder, kidnapping, gangrape, destruction of evidence, drugging the victim and common intention.

They have been sentenced to life imprisonment and fined Rs 1 lakh each for murder along with 25 years in jail for gangrape, they said.

Their three accomplices -- Sub Inspector Anand Dutta, Head Constable Tilak Raj and special police officer Surender Verma -- who were convicted for destruction of evidence have been handed over five years imprisonment, they said.

According to the 15-page charge sheet, the eight-year-old nomadic Muslim girl, who was kidnapped on January 10 last year, was allegedly raped in captivity in a small village temple in Kathua district after having been kept sedated for four days before she was bludgeoned to death.

The day-to-day trial commenced in the first week of June last year at the district and sessions court in Pathankot in neighbouring state of Punjab, about 100 km from Jammu and 30 km from Kathua, after the Supreme Court ordered that the case be shifted out of Jammu and Kashmir.

The trial, which had begun in April 2018 against seven accused out of eight, concluded on June 3 last week.

Welcoming the verdict earlier in the day, former chief minister Mehbooba Mufti said it is high time “we stop playing politics over a heinous crime where an 8-year-old child was drugged, raped repeatedly and then bludgeoned to death.”

Welcome the judgement. High time we stop playing politics over a heinous crime where an 8 year old child was drugged, raped repeatedly & then bludgeoned to death. Hope loopholes in our judicial system are not exploited & culprits get exemplary punishment https://t.co/jBuRUdGa5h

Former Chief Minister Omar Abdullah also welcomed the verdict while criticising those politicians who were defending the accused after there was a national outrage after the gruesome crime.

He said, “the guilty deserve the most severe punishment possible under law. And to those politicians who defended the accused, vilified the victim & threatened the legal system no words of condemnation are enough.”

Amen to that. The guilty deserve the most severe punishment possible under law. And to those politicians who defended the accused, vilified the victim & threatened the legal system no words of condemnation are enough. #KathuaRapeCase https://t.co/gL2FfRL3rJ

After post-mortem, when her body was brought to a nearby village, a group of youths disallowed her burial in the graveyard owned by her family and relatives. The girl was later buried eight km away, in another village. The then government transferred the case to the Crime Branch of Jammu and Kashmir Police.

On February 14 last year, a group called Hindu Ekta Manch, carried out a rally with tricolour in their hands allegedly in favour of the accused seeking their release. Then chief minister Mehbooba Mufti had said she was 'horrified' by the use of the national flag in such demonstrations, which was nothing short of desecration.

The court in Pathankot was turned into a fortress on Monday, as a large number of security personnel and riot control vehicles were deployed ahead of the verdict in the gruesome rape and murder case.

The trial of a juvenile is yet to begin, as the petition on his age is yet to be heard by the Jammu and Kashmir High Court.

All of them, except the juvenile, are currently lodged in Gurdaspur jail in Punjab.

Two first information reports (FIRs) were filed in connection with this case. One against eight accused of allegedly being involved in the crime, and another against a group of lawyers, who had allegedly stopped the police from filing the charge sheet against the eight accused in this matter.