Pandemic, livelihood, and development are uppermost in people’s minds as Sabarimala takes a back seat. 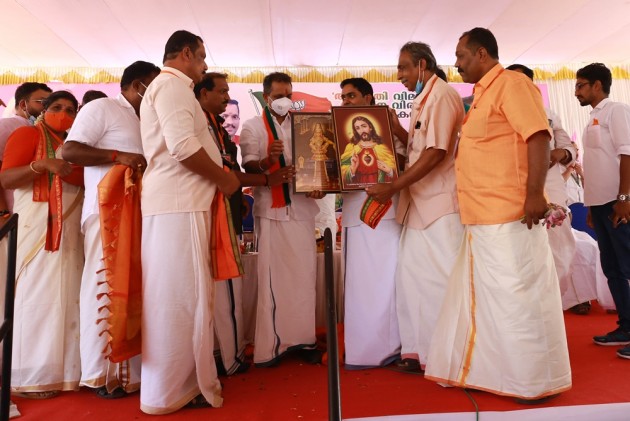 At Pathanamthitta district, the ground zero of Sabarimala temple agitation, conversations around Lord Ayyappa, or the vexed issue of women’s entry into the temple, barely figures in the poll-scape. Barring a few posters and flex boards that announce “a vote for Ayyappa’, political debates veer invariably around development and candidates. Every election in this central Travancore district has assumed significance since the 2018 Supreme Court verdict of allowing entry of women of all ages into the hill shrine.

“Sabarimala is not an issue in the constituency anymore, people talk more about development and local issues,” says Sasi Isaac, who runs Hotel Aroma’ near Pathanamthitta collectorate.

Every voter is aware that Sabarimala resonates with the entire state, especially after Prime Minister Narendra Modi’s visit to the constituency and his invoking of the Sabarimala issue ahead of the Assembly polls.

No wonder, for all the three principal players --- the CPM-led LDF, Congress-led UDF, and the BJP-led NDA --- election to the five Assembly segments in the district is a high-stakes one.

During an election rally on Friday, the Prime Minister blamed the LDF government for destabilizing the sacred shrine and attacking the devotees with lathis instead of welcoming them with flowers.

The memories of the 2018 violence are still afresh for many. The hill temple and the surrounding area were rocked by violence after the LDF government facilitating protection to women devotees following the Supreme Court order allowing entry of women between the ages of 10 and 50 into the Sabarimala temple.

Isaac, who has been running Hotel Aroma for the last 15 years, thinks that the ruling LDF has done stellar work in the past five years. Though Isaac doesn’t want to reveal his choice of party, he feels that there is a favorable trend towards the LDF. 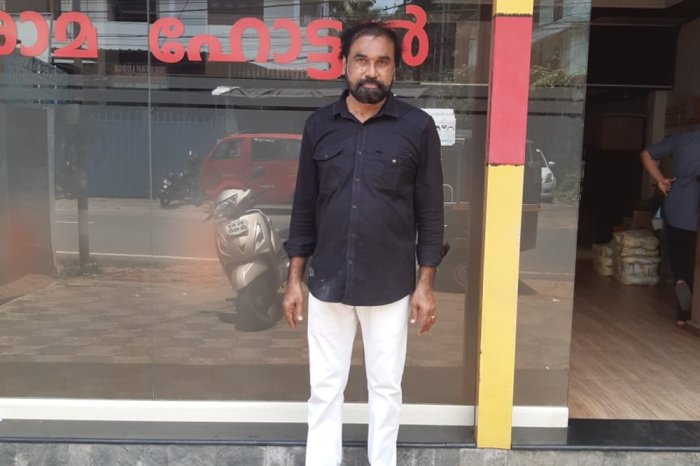 Sasi Issac says that people are concerned more about development than Sabarimala.

“The CPM government has done excellent work in all areas. We are getting free ration, medical facilities, infrastructure development among other things,” says Issac, adding that Sabarimala wasn’t an issue in the 2019 Parliament election too. “If it was an issue, then it would have benefitted the BJP,” he says.

Though the Congress backed the Supreme Court order of women entry initially, the party took a U-turn later opposing the entry of menstruating women into the temple. Both BJP and Congress spearheaded widespread protests in the state, which turned ugly and culminated in violent incidents, including two deaths.

The Sabarimala agitation has dealt a severe blow to the LDF in the 2019 Lok Sabha election as it won only one seat out of the 20 Lok Sabha seats. The UDF got 19 seats. However, the LDF’s impressive win in the recent local body elections had given a breather to the party.

Sensing opportunity, the BJP, and the Congress are banking heavily on the issue of women's entry to the temple and “protection of faith” as the main issue in this election. Both parties have proposed legislation to ban women's entry into Sabarimala in their manifestos. The Congress manifesto has even proposed up to a two-year jail term for those who violate traditions and rituals of the temple.

Congress leader and INTUC state general secretary Jyothish Kumar exude confidence that the proposed legislation on Sabarimala will work in favor of the party this time. “Sabarimala won’t benefit the BJP. The Congress’s proposed legislation and two-year term punishment for violators of traditions have been lapped up by the voters,” says Kumar.

A few miles away, in Konni, Jayaprakash, a local news journalist was there to cover the Prime Minister’s roadshow.  As much as for the other two players, Konni's seat is crucial for the BJP as it fielded its state president K Surendran who led the agitation in the district and across the state. 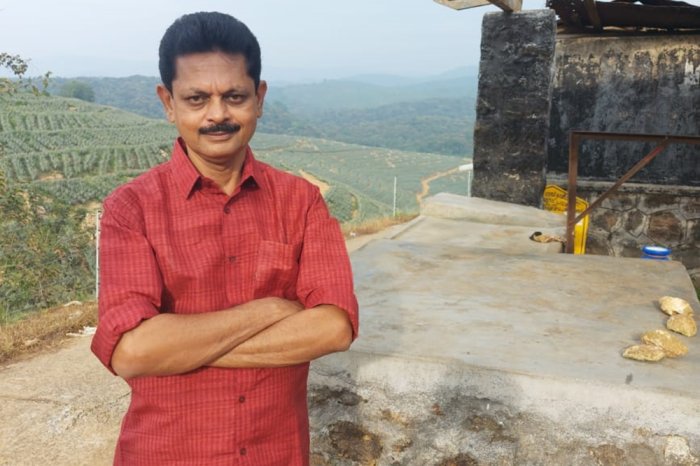 Jayaprakash will vote for LDF this time. Last time he voted for BJP in Sabarimala issue.

Surendran, who contested in both Parliament and by-election managed to come only in third place in both the elections. However, there had been an increase in the party's vote share. This time, Surendran is pitted against LDF's sitting legislator KU Janeesh Kumar and UDF's Robin Peter and the contest is expected to be a tight one, according to observers.

T Jayaprakash, an ardent devotee of Lord Ayyappa, says that the mood on the ground has changed in the past two years. People have now moved on says Jayaprakash, who was a regular at the temple. Development and issues of livelihood have taken center stage, he adds.

The pandemic and the crisis management by the government had taught everyone a lesson, he says. “I will vote for the LDF this time, though I have voted for the BJP in the 2019 Parliament election,” he says. 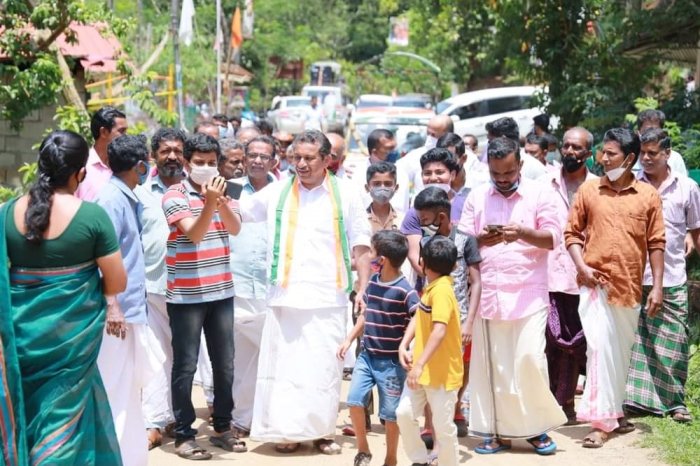 The reason to vote for the BJP in the 2019 election was the agony caused by the LDF government’s decision to allow women into the temple. “Sabarimala is an emotion for the people here. I wanted to register our protest against the government’s decision that time,” he says, adding that a close fight is on the cards between the three fronts. “People are happy with the welfare measures taken up by the LDF government. Many surveys also predict an LDF win, so people will go for the winning side. Moreover, Congress leadership is in disarray here,” he says.

Then there are devotees such as 70-year-old Savithri Amma, who is still unable to recover from the incidents in 2018. She couldn’t eat for days after two women entered the temple, she says. “I have never voted for the Communists before. Now I will never,” she says.

The CPM, which was cornered by the Sabarimala issue, has taken a diplomatic stand this time. The party has made it clear that that the matter will be discussed with all stakeholders once the SC’s larger bench ruling is out. Currently, the SC is looking into the review petitions regarding the 2018 Sabarimala ruling.

The LDF finds solace in voters like Jayaprakhash, who will choose them for the development initiatives taken up by the government says CPI (M) district committee, member S Haridas.

“People are no longer bothered about Sabarimala. Both BJP and Congress tried to rake it up in the local body elections and by-election, but they terribly failed. How can anyone bring legislation on an issue, while the matter is before the SC? They are misleading people in the name of belief,” he says, adding that the CPM won the village panchayats of Perunadu in Ranni, where the Sabarimala temple is located.

Community equations also play a crucial factor in the district, which has a dominant Christian population. Father Williams C B, of Believers Church, was witness to the agitation in 2018. Father Williams, who resides in Ranni’s Perinadu village, says that the issue has been used by some political parties to their advantage in 2019 election. However, the situation has undergone a vast change since then, he feels. “People are concerned more about livelihood. People don’t talk about Sabarimala anymore. It’s the impact of the pandemic, which turned everyone’s life upside down. I am happy with the way the government handled the floods, lockdown and corona. No one went hungry during the lockdown,” he says.

He also feels that parties are treading cautiously considering the sensitive nature of the issue. “The wounds are yet to heal in some people. But for many, development takes precedence over Sabarimala. Covid-19 taught everyone the right lessons about religion, money power, politics, and loving each other,” he says.