A group of police personnel and volunteers cleansed the temple premises as part of an initiative to promote 'responsible and conscious pilgrimage'. 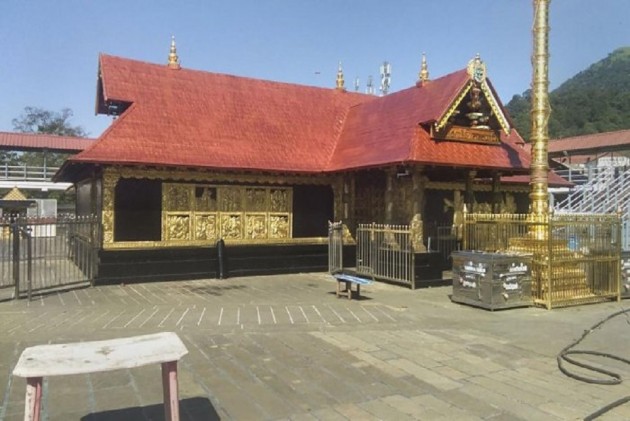 The latest edition of the "Punyam Poonkavanam", the mass cleanliness drive implemented by the Kerala police in Sabarimala during the annual pilgrimage season, has got underway as the Lord Ayyappa temple opened for the two-months-long Mandala-Makaravilakku festival.

Kandararu Rajeevaru, the head priest of the hill shrine here, formally launched the present year's initiatives at ''Sannidhanam'', the temple complex, on Monday.

Soon after the inauguration, a group of police personnel and volunteers led by Inspector General (IG) of police P Vijayan, who conceptualised the programme, cleansed the ''bhasmakulam'', a temple tank and its premises, police sources said.

Inaugurating the initiative, Rajeevaru said the young generation should give more priority to keep the ponds and sacred groves waste-free. He also urged to extend the drive to more places.

Kerala High Court judge justice P Gopinath, who took part in the function, said there is no other sacred activity than cleaning the premises and removing garbage. Travancore Devaswom Board (TDB) president, N Vasu launched the updated version of the "Punyam Poonkavanam" website during the occasion. ''Punyam Poonkavanam'' means the divine grove of Sabarimala Lord Ayyappa.

According to police sources, the ultimate objective of the programme is to promote the culture of 'Responsible and Conscious Pilgrimage' to all centres of worship and not just Sabarimala.

In the long run, the same would be extended to all possible places of worship and promote eco-sensitive pilgrimage, they said.

Besides the police, Departments of Devaswom, Health, Forest and Fire and Rescue along with voluntary organisations like

Ayyappa Seva Sangham and Ayyappa Samajam also actively take part in the drive every year. Since 2011, the High Court has appreciated this project in more than eight judgements and directed the state government and Departments of Devaswom and Police as well as devotees to work for the success of the same.

Prime Minister Narendra Modi mentioned about this project in his monthly broadcast programme Mann ki Baat and the Centre has listed this as a ''model project'' under the prestigious ''Swachch Bharat Abhiyan''.