So far, 2.75 lakh Non-Resident Keralites have registered in the government website to return to Kerala. 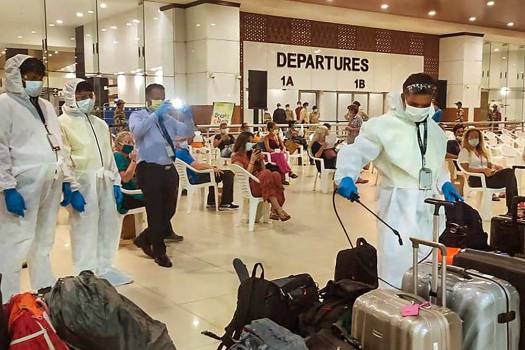 Kerala may be the first state to make elaborate arrangements to receive all NRIs belonging to the state who wish to return. However, the state government says the Centre is yet to give a nod to the proposal to arrange for aircrafts to bring the NRIs back.

Speaking to Outlook, Kerala Finance Minister, Thomas Isaac, said the state government is yet to get any response from the Centre, though Chief Minister Pinarayi Vijayan has written to Prime Minister Narendra Modi in this regard.

The state has opened online registration through the website of the Department of Non-Resident Keralites Affairs (NORKA) for those who want to return. So far, 2.75 lakh people from 150 countries have registered in the NORKA website expressing their wish to return.

Taking a dig at the Centre, Issac said that the Modi government is shirking their responsibility of bringing back the people who are stranded abroad.

“The most important thing is to operate aircrafts. International and inter-state migration is in the union list. So it’s the direct responsibility of the union government to bring back and rehabilitate them,” he said.

The minister also said that the Centre is keeping mum on announcing financial packages for the expatriates despite requests by the state government.

“This is in the realm of the central government and they should come out with a relief package for the people who are coming back. The Centre hasn’t come up with any announcement so far,” he said.

However, Isaac said that though Kerala is in a dire state, it will chalk out plans to create opportunities for the NRKs.  “We can’t abdicate our responsibility of protecting them. We will work out the best through our agencies,” said Isaac.

Elaborating the arrangements to receive the expats, an official said that a committee under the district collector with representatives from the Airports Authority of India and the state police would oversee the arrangements at the airports. A team of doctors and paramedical staff will be deployed at the airport for detailed check-up of the arriving passengers.

“Those returning should undergo screening at airports. All those returning will have to undergo home quarantine for 28 days. Health workers will be visiting them daily and if anything required, it will be delivered to their houses. They cannot go out and no visitors would be allowed," said Isaac.

He added that people with symptoms will be isolated in facilities near the airport. Adequate quarantine and medical facilities near airports have been identified and made ready in this regard. Tele-medicine facilities and mobile medical units would be set up under panchayats to ensure proper medical care for those in isolation.

The state government has also proposed that it will make adequate arrangements at ports if the central government decides to bring people by ship. “We have enough stock of PCR and RNA extraction kits. The Kerala Medical Services Corporation has been directed to procure more kits”, it said.

Kerala has been widely appreciated for its efforts in containing the COVID-19 spread. Isaac said that many NRKs, even from the European countries, have expressed desire to return to Kerala because of the state’s effective measures to curb the pandemic.

“People from Europe are also coming back. More than 100 Malayalis died abroad due to Covid-19, while in Kerala, only three people have died so far,” he said.

Isaac also expressed hope that the state will bring down the number of active cases of Covid-19 soon.

“We hope to bring down the number of active cases to single digits by the time expats come back. We can contain it within manageable limits,” said Isaac.