'This Is How I Celebrate Eid': Kerala Garment Vendor Donates New Clothes To Flood Victims

Kerala has been grappling with massive floods in several districts, and at least 50 people are said to be missing. More than two lakh people had been evacuated to relief camps till Sunday across the state. 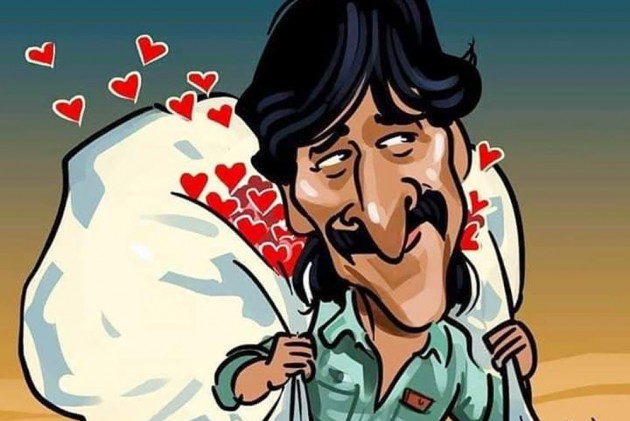 At a time when heavy rains and floods have claimed 76 lives in Kerala, Noushad -- a street cloth vendor in Kochi -- has become the face of relief work in the state after he donated all clothes from his small shop to flood victims. Not only that, people are also sharing his photograph on social media for having set a precedent for others to follow in this hour of distress, and some remembering him even in their Eid wishes and prayers.

“Tomorrow is Bakrid; this is how I celebrate it. I am not worried about my profit,” he was heard saying in the video. “When we die, we don’t carry anything back,” says Noushad, a small-time garment seller at the Broadway in Ernakulam.

Kerala has been grappling with massive floods in several districts, and at least 50 people are said to be missing. More than two lakh people had been evacuated to relief camps till Sunday across the state.

Noushad's efforts came to people's notice after actor Rajesh Sarma shared a video on social media in which the former was seen filling several sacks with new clothes, and carrying them to the waiting vehicle. The Sarma-led group of volunteers reached out to Noushad since he had donated clothes when the state was hit by one of the worst floods in its history last year.

Noushad's phone hasn't stopped ringing after the video went viral. Outlook, too, tried reaching out to him but failed. Many, including state ministers and film stars, have taken to social media to laud Noushad’s efforts. An NRI even offered Rs 50, 000 to him. People inquired about the location of his shop to pay a visit and shop next time.

The state government, however, has another task cut out for itself -- to counter the negative campaign by a section against its flood relief efforts. In the last two days, social media has been abuzz with misleading posts asking people not to contribute to the Chief Minister's Distress Relief Fund (CMDRF). Many citizens, who are involved in the relief operations, told Outlook that the hate campaign has slowed down the flow of contributions to the relief funds.

In the wake of negative publicity, Chief Minister Pinarayi Vijayan held a press conference on Sunday and urged people not to fall for misinformation and rumours, dissuading them from donating to the relief fund. “Apart from donations, a portion of the state budget is also being used for the CMDRF. The ‘misinformation campaign that the fund was being used for any other purpose is mischievous,” he said.

State Finance Minister Thomas Issac also lashed out at hate campaigns in a Facebook post, pointing out that the CMDRF funds were open to audit by the Comptroller and Accountant General and budgeting and expenditure were subject to scrutiny by the State Legislature.

A volunteer, involved in the relief work, said it was appalling to see FB posts inciting a divide between the northern and southern parts of Kerala. The rains, this time around, have wreaked havoc in the northern parts of the state —Wayanad, Malappuram, Kozhikode and Kasaragod.

Some posts claimed that since the northern region was dominated by Muslims, people from the southern parts were not willing to contribute. As the issue gained currency, BJP state leaders denied their role in hate campaigns.

In 2018, when torrential rains lashed Kerala, it witnessed unprecedented co-operation and support from citizens -- from inside the state as well as from those living outside. The state’s exemplary effort in rehabilitation post floods was widely appreciated by the international communities and UNICEF too.