Kerala Rains: Idukki dam, constructed across the Periyar river, is one of the highest arch dams in Asia. 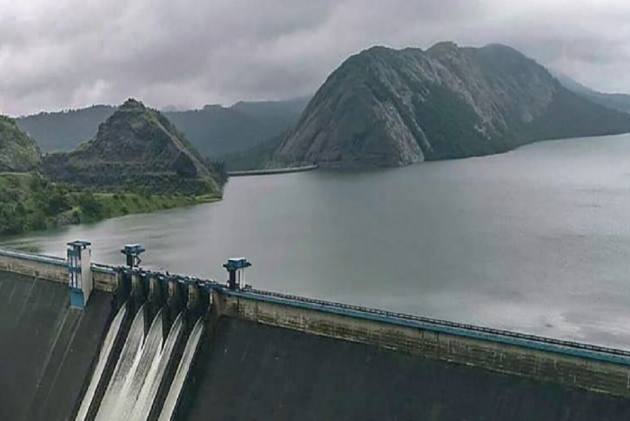 Kerala will open Idukki and Idamalayar dams on Tuesday morning following heavy rains and increase in the water level at reservoirs.

Idukki dam is one of the highest arch dams in Asia.

Kerala Water Minister Roshy Augustine on Monday said  the dams would be opened on Tuesday morning based on the state's past experiences and in order to allay people's concerns.

The minister announced opening of the Idukki dam, constructed across the Periyar river, following the Idukki district administration issuing a red alert at 6.00 PM stating that due to the increase in the dam's water level -- which had reached 2,396.86 feet at 7.00 AM on Monday -- there was a possibility it would breach the upper limit of 2,398.86 feet by Tuesday 7.00 AM and therefore, people need to be alert.

"In view of the rising water levels of Idukki dam, it has been decided to open two of its shutters by 50 centimeters to let out 100 cubic metre per second (100 cumecs) of water flow.

"The decision has been taken to control the water level of the dam at 2,395-2,396 feet in the wake of a warning from the Central Meteorological Department that there would be heavy rains in the coming days. The decision was also based on past experience and was meant to allay people's concerns," the minister said in a state government release.

Besides, the expected opening of the Idukki dam, the dams at Sholayar on Chalakudy river and Kakki on Kaki river have already been opened and the ones at Idamalayar in Ernakulam and Pampa in Pathanamthitta are scheduled to be opened on Tuesday morning, the state government has announced.

Chief Minister Pinarayi Vijayan on Monday asked people living on the banks of the rivers, whose dams are being opened, to be more cautious and take necessary precautions.

Opening of all these dams might bring back the haunting memories of the 2018 floods, to its survivors, when most of the dams in the state were opened to release water amid heavy rains which led to widespread flooding and landslides resulting in loss of life and property across the state.

As release of water from Idamalayar and Idukki dams would flow through Aluva, the commercial hub of Ernakulam, state Industries Minister P Rajeev held a meeting to deal with resulting consequences.

Subsequent to the meeting, Rajeev said in a release that steps are being taken to ensure water from Idukki and Idamalayar dams do not flow into the Periyar together.

He also directed the Irrigation department to remove the obstructions to the smooth flow of water in the river on a war footing.

The announcement regarding opening of the dams comes in the wake of the general directions issued by Chief Minister Pinarayi Vijayan in a review meeting held during the day to assess the situation with regard to the rainfall and water levels of various dams in the state.

The CM, according to a state government release, made it clear that opening of shutters of any dam would be decided by an expert committee, tasked for the purpose, which will take a decision based on the amount of water in each dam.

The exact hours of opening should be informed to the district collectors concerned in advance so that locals can be informed and they have enough time to evacuate.

During the day, after a review meeting held at Pathanamthitta district collectorate to assess the situation there, Kerala Revenue Minister K Rajan and state Health Minister Veena George said in a press conference that red alert has been issued in respect of 10 dams in Kerala, two shutters of Kakki dam here have been opened and pilgrimage to Lord Ayyappa temple in Sabarimala has been put on hold for now.

The ministers said that the state disaster management authority had on Sunday recommended opening of Kakki dam and therefore, in the meeting it was decided to open two of its shutters by 30 cm to release 100-200 cubic metre per second of water which would raise the level of Pampa river by around 15 cm.

They said the decision was taken in view of the water level in the dam increasing beyond the danger levels and also taking into consideration the heavy rainfall expected from October 20 which might worsen the situation if some water is not released now.

In view of the expected worsening of the weather from October 20 till October 24, according to IMD information, they said it would not be possible to permit pilgrimage to the Lord Ayyappa temple at Sabarimala for the Thula Masam poojas for which the shrine had been opened from October 16.

The ministers said there was "no other option" but to stop the pilgrimage for now, as otherwise it would be difficult to safely rescue everyone if water levels in the nearby Pampa river were to rise further due to the heavy rains predicted from October 20.

The CM, according to the release, also said that pilgrimage to Sabarimala for the Thula masam poojas has been cancelled and the district administration has been directed to repatriate the pilgrims who have already arrived there.

The CM directed that the 184 relief camps in the state should have adequate facilities and food, clothing and bedding should be provided to people shifted there, the release said.

He also directed that people must be evacuated from landslide-prone areas, vehicles should not be permitted to pass through high levels of water and distribution of financial assistance be intensified, it said.

He also said that opening of colleges will be postponed to October 25.

Rajan and George, in their press conference, had said there was no need to panic and people should not spread messages on social media which could cause panic among the general public.

Rajan said 'red alert' has been declared for 10 dams, which include, Kakki, Sholayar, Matupatti, Moozhiyar, Kundala and Peechi, most of which are located in Pathanamthitta, Idukki and Thrissur districts of the state.

Besides that an 'orange' alert has been declared in respect of eight other dams, he said.

Earlier in the day, due to rising water levels in various dams due to heavy rains in the catchment areas and the eastern hilly regions of the state, the Kerala government issued alerts to the public that shutters of certain dams will be raised, resulting in increase in water levels of rivers in south and central Kerala.

The CM's review meeting was called in view of rising water levels in various dams including Sholayar, Pampa and Kakki.

The low-lying areas of Cherickal, Poozhikadu, Mudiyoorkonam and Kurambala regions near Pandalam, along the banks of Achankovil river, have been flooded.

As the water level in the Achankovil has been rising, an alert has been sounded along the banks near regions of Aranmula, Kidangannur and Omalloor.

People have been shifted to various relief camps opened in Pathanamthitta district.

Meanwhile, the state government has appointed ADGP Vijay Sakhare as the nodal officer to coordinate the rescue and relief operations.

Thrissur District Collector Haritha V Kumar in the morning asked the public residing along the banks of Chalakudy river to remain vigilant as water levels may rise as Sholayar dam was expected to be opened during the day.