Kharge Hits Out At Congress Colleagues Criticising Party, Accuses Of 'Weakening' From Within

Kharge says, '... we have to fight unitedly. It has pained me that some senior leaders have spoken against the party and its leadership.' 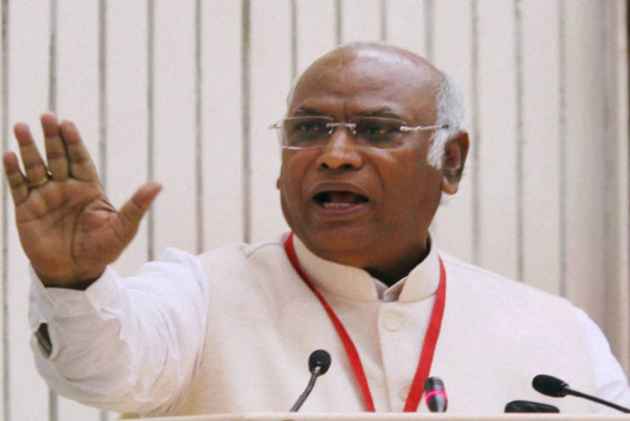 Lashing out at colleagues who are targeting the Congress leadership following defeat in elections, senior leader Mallikarjun Kharge on Thursday accused them of 'weakening' the party from within.

Stressing the need to support the party high command, he said, "... we have to fight unitedly. It has pained me that some senior leaders have spoken against the party and its leadership."

Speaking at an event to mark the birth anniversary of former prime minister Indira Gandhi, Kharge said, on the one hand, we have BJP and RSS on our back and on the other, these people are drilling from within.

"if we weaken the party and our leaders in such a way, definitely the party cannot go forward and ultimately if our ideology is weakened we will be destroyed. You will have to keep this in mind," he added.

Kharge's comments come in the backdrop of questions raised by a section of Congress leaders against the leadership after a dismal performance in Bihar polls.

Congress leader Kapil Sibal had recently criticised the leadership for the party's abysmal performance in the Bihar elections, where it bagged only 19 of the 70 seats it contested.

He was part of a group of 23 senior Congress leaders who had written to party chief Sonia Gandhi in August, giving suggestions on ways to revive the grand old party.

Citing an old adage that the true nature of our friends and those with us can be measured during a defeat and that of a family during illness, Kharge said now that we have seen a defeat, your true nature can be seen, how strongly you are backing us and are giving strength to our principles.

"When the party is in a good position everyone will praise... when weak or lost they blame (leadership) for not paying heed to them. So your workers don't do what others are doing," he said.

Noting that there are some leaders who blame Rahul Gandhi and Sonia Gandhi for the defeat, without naming anyone, Kharge, a Rajya Sabha member said every state has leaders, they demand tickets for themselves or loyalists while finalizing candidates.

Ninety per cent of the tickets are given based on their (state leaders) advice, despite that after the loss they complain that nobody listens to them, lack of unity, he noted.

Pointing out that it was decided in the Congress Working Committee that Sonia Gandhi should continue as interim president until elections are held, Kharge said polls are yet to be held and Covid-19 hasn't still gone, we can't have 100 people together in one place, and yet, people are talking.

Congress legislature party leader Siddaramaiah said Kharge has spoken pained by the developments within the party.